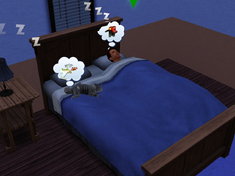 Sims' energy slowly decreases while they are awake. If a Sim runs out of energy, he/she will collapse from exhaustion and fall asleep on the floor.

Sending a Sim to work or school with low energy will harm their performance. While they won't collapse from exhaustion away from home, they may do so as soon as they return. In The Sims 2: University, a Sim that gets very tired while eating will fall asleep face first in their food. Oddly enough, they will still eat it afterwards.

If a Sim needs a quick boost of energy, they can drink coffee or espresso. Children cannot do this, but with The Sims 2: Seasons, they can get some energy by drinking hot chocolate from the Perfect Packets Hot Chocolate Maker. Sims can get coffee from a coffeemaker or an espresso machine. Sims can buy an espresso from the espresso bar[Unleashed][TS2:U] while on community lots, but they may be better off going home instead, as coffee and espresso decreases bladder, and may have other side effects.[TS2]

Sims also gain a small amount of energy from sitting down.[TS] Sims can nap on lounge chairs, recliners, and sofas, but it doesn't replenish energy as effectively as sleeping in a bed, and active Sims may wake up before they're fully refreshed.[TS][TS2]. In The Sims 3 and The Sims 4, Sims will automatically wake up from a nap after a few hours, with a moodlet that counteracts the effects of low energy.

Sims will not die from exhaustion, though if they become extremely tired while in a pool, they can drown. They will normally get out of the pool autonomously before this happens unless they are prevented from doing so, such as by removing the pool ladder. 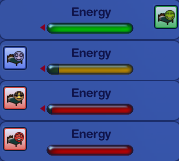 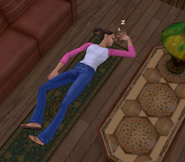 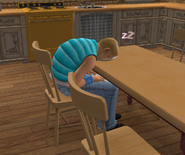 For servos[TS2:OFB], the equivalent of energy is Power. Servos can replenish this by sleeping or napping, the same as Sims can. If it's daylight, they can use the "Recharge" self-interaction to go outside and stand in the sun until their power is replenished. If they are in gold or platinum aspiration, they can also restore their power by using The Eclectic and Enigmatic Energizer or drinking the Elixir of Life. If the power need gets too low, a servo will either go outside to recharge, or go berserk and require repairs by a Sim with high mechanical skill, preferably one with a gold talent badge in robotics.

Note
The MaxMotives cheat will not restore a servo's Power motive or a PlantSim's sunlight motive.

For plumbots[TS3:ITF], the equivalent of energy is Battery Power. A plumbot recharging station is available in Buy mode, and plumbots will recharge while shut down. Charging at a recharging station does not appear to be that pleasant however. The plumbot will repeatedly twitch and sometimes bend down and put its hand to the side of its head as if in pain while charging. If a plumbot's battery power is completely drained, it will shut down. A plumbot with the Solar Powered trait chip will gain battery power while outdoors in daylight. Unlike servos, plumbots can remain active while using solar power, but the chip may not always provide enough power to completely offset the power drain caused by whatever the bot is doing. Plumbots can syphon power from appliances, but at a cost to their maintenance need.

Retrieved from "https://sims.fandom.com/wiki/Energy?oldid=835202"
Community content is available under CC-BY-SA unless otherwise noted.