Every once in a while, he invades Strangetown alongside other aliens. It is said that nobody is sure why he invades Strangetown. When Optimum Alfred locks himself in the Penthouse to avoid the player from stealing his blueprints, Emperor Xizzle teams up with the player and tasks them to earn five Mechanical Skills, break into the Penthouse, and steal Alfred's blueprints. The player must go into the Penthouse when Alfred is gone, which is between 6 pm and 10 pm as the Concierge states(otherwise Alfred will transport the player back into the Manager's Suite after yelling about Strangetown's laws). Once the game is over, Xizzle returns to his evil ways.

Emperor Xizzle is seen in the introduction of each episode as one of the "Starring" characters and plays a major role in several episodes.

In "Aliens Arrived," he launches a full-scale invasion on Strangetown, and it is up to the player to defeat him. He is first scene at the docks, one of the other aliens explaining to him that his disguise failed because he had been sprayed by water. Later in the episode, the player disguises themselves as an alien, and Emperor Xizzle asks the player to shoot a weapon for him. Instead, the player can switch out the wires. Xizzle will then get impatient and shoot the weapon instead. However, it malfunctions and ends up destroying the ship.

In "Blackout!", Emperor Xizzle attempts to buy all the nuclear rods that Kent Hackett stole from the nuclear power plant.

In "A Brand New Scent," Emperor Xizzle is one of the bachelors enchanted by Kayleigh Wintercrest's perfume, but he's worried that she won't like him because he has green skin. So, he tasks the player into finding him makeup that can make him more "human-color seeming." His nephew, Burple, translates his dialogue for the player.

In "The Doomed Earth," Emperor Xizzle appears in the opening and ending cut scenes. He does not show up in the episode otherwise, but he still shows a sentiment of not wanting Earth to be destroyed in order to "continue their studies."

In "It All Came to an End," the player must get a super hyper mega Super Drencher from him in order to mess up Optimum Alfred's programming. Daddy Bigbucks says this is to replace Emperor Xizzle as an antagonist as he is "not in his control." The errand in this episode also involves him, being that you need to bring a ray gun to him(obtained by talking to Burple). Emperor Xizzle is revealed to have been being paid by Daddy Bigbucks to be a star in Strangetown the whole time. At the end of the episode, Xizzle and the aliens kidnap Daddy Bigbucks.

And, finally, in "A Very Special Reunion," it is revealed that, after the cancellation of "Strangetown," a new sitcom started up called "The Bold and the Bug-Eyed," featuring Emperor Xizzle, Burple, and many other aliens. In the five years since the previous episode, Emperor Xizzle has since become the mayor of Strangetown and is now known as Mayor Xizzle. The player will need to convince him to host a reunion by being friendly with him. During the reunion itself, Emperor Xizzle will place a "bomb" in the dance club, and the player has to find it. It ends up being just fireworks. The episode ends with the player and Mayor Emperor Xizzle having a boogie. 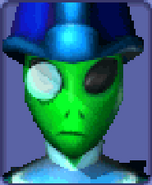 Emperor Xizzle in the player's lobby in The Sims 2 (DS)

Retrieved from "https://sims.fandom.com/wiki/Emperor_Xizzle?oldid=941511"
Community content is available under CC-BY-SA unless otherwise noted.