Emmy Starr is a pre-made four star celebrity Sim, residing in Bridgeport, where she lives in a mansion in the hills section of the city.

She is dating Alan Stanley, with whom she also lives. He is a celebrity film director, and she works for him in the Film career, though her celebrity status is higher than his. She is good friends with Cressida Wells, distant friends with Lilly-Bo Chique and strongly dislikes Tiara Angelista. She has 5 skill points in Charisma. She must socialize with her co-workers, since it is a parameter she is failing at. Her charisma may help her to socialize with her co-workers and, consequently, improve her job performance. Her bio states that her relationship with Alan has been making her much more popular. Emmy also has a good quality camera and photography skill if World Adventures is installed. If story progression is left on she may have a child (with Alan Stanley), regardless of her Dislikes Children trait.

It is possible that she might be related to Alexa Starr, as they share the same last name, possibly even her daughter from Alan.

Her name may be a pun on the Emmy Awards, which recognize excellence in the television industry. 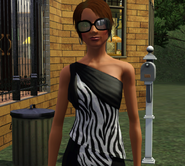 Add an image to this gallery
Retrieved from "https://sims.fandom.com/wiki/Emmy_Starr?oldid=885136"
Community content is available under CC-BY-SA unless otherwise noted.