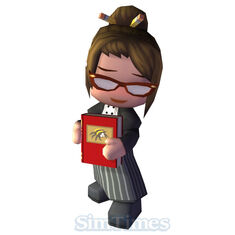 Elmira Clamp is a librarian in the MySims series who hates noise, mostly because she grew up surrounded by it. Elmira Clamp grew up between an airport and a construction site in a tiny house with thin walls. Her father was the lead drummer in the experimental rock band, Nothin' But Drums, and her mother raised howler monkeys. Elmira hates noise, and she hates Sims who make noise. Her Auntie Crumplebottom taught her, "The best mouth is a shut mouth!".

Elmira loves Studious, likes Spooky and hates Fun. Since she is the niece of a Mrs. Crumplebottom, it can be presumed that she is related to the Crumplebottom family in some way. She also has a nephew named Ian Arneson.

She also appears in MySims Kingdom as a peasant who lives in a small home. At the beginning of the game, the player has to do a task which includes herding her pigs toward her house.

She also appears in MySims Party. On Nintendo Wii, she runs the minigame, Rack the Stack, where she needs you to take the books from the check-in counter and put them in the color-matching shelf. She also hosts the Intense Festival, where the player'll be able to participate in some intense (and quiet) minigames. On Nintendo DS, she runs the minigame, Hush Hush Library Rush, where she wants the player's Sim to clean her library. The player can run but that will anger Elmira.

She also appears in MySims Agents. She is a client of the Headquarters, asking for help at one of her libraries. There is a huge mess at the library with books strewn about everywhere. She needs help organizing and stocking the shelves with books and other media before dawn, when the library opens. If a team of assigned agents do a job well done, she will be very happy and volunteer as an agent.

In The Sims 4, there is a small Elmira Clamp statuette that can be found by digging up a capsule box in a random location.

Retrieved from "https://sims.fandom.com/wiki/Elmira_Clamp?oldid=908076"
Community content is available under CC-BY-SA unless otherwise noted.