An elder is the last Life stage in The Sims 2 and The Sims 3.

In The Sims, elder does not exist as a separate life stage, as Sims in this game never age. There are head and body skins which can give a Sim the appearance of being elderly, but it will be no more than an appearance. This means that female Sims who appear elderly in the game, such as Cornelia Goth and Ginia Kat, can still have children.

Elder is the final life stage in The Sims 2. Sims will have grey hair and a hunched back during this stage. At the end of elderhood, the Sims dies of old age. It's the only age that doesn't have a fixed duration - The days remaining theoretically depends on the aspiration bar when that Sim ages. The higher it is, the longer he or she will live. They will generally live to be about 70 days old, but getting the Perma-platinum may increase it to about 80 days . Elders do not have many special interactions, but a notable feature is that if two elders are married as Adults, they can throw a golden anniversary party. Elder female Sims cannot get pregnant, but elder male Sims can still impregnate Adult female Sims. Elders can retire and live off a pension if desired (since it's usually a big want, it's highly recommended that they do). A retired Sim's weekly pension will be half the weekly salary of the job he or she retired from, and the Sim will receive one-seventh of that each day. If an elder lives a good life (when their aspiration bar turns platinum), their grave will turn golden.

Examples of Elders in The Sims 2 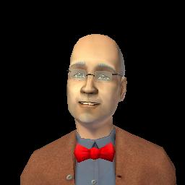 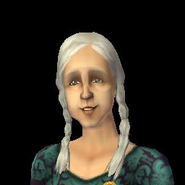 One deceased elder of Veronaville, Lady Scott
Add an image to this gallery

Just like The Sims for PC, elders in the console version of The Sims 2 do not exist. But in CAS you can put white/grey hair with old-like skin. Sims like Patrizio Monty and Isabella Monty look like elders, but are still technically adults (since you can change their lookqs and make them "younger").

Elder is a life stage featured in The Sims 3.

In The Sims 3, Elder is the last life stage before Death. Sims have gray hair, but they can color it if the player so chooses. Women can no longer give birth to children, but men can still impregnate adult and young adult women. How long this life stage lasts depends on how long the player set his Sim's life. At the default lifespan of 90 days, Elder Sims will live to be at least 90 days or older. Elder Sims with the Vegetarian trait live slightly longer than other Sims. A Sim's life can also be lengthened by completing the Marathon Runner challenge as part of the Athletic skill or eating Ambrosia. At the end of this life stage, Sims die of old age. Elders have 5 traits. The next life stage is Death.

Elders Sims are slightly hunched over and complete tasks slower than other Sims. Instead of having a bar on the Simology panel that indicates how many days left until they age, the bar states how many days the Sim has lived. Elder Sims are 74 days old when they first become an elder.

Retirement lets Sims enjoy the time they have left without paying attention to workdays. This option, however, can bring financial disadvantages. A player who has his Sim at level 10 political career will earn about §582 per hour, working three days a week as an elder. With his working hours from 9:00 to 1:30, he would bring home §2619 every workday, which is much larger than the §280 he will receive daily after retirement. In this case, much more money was earned by working only 3 days per week, so retirement may not always be the best choice, depending on the player's opinion.

Retrieved from "https://sims.fandom.com/wiki/Elder?oldid=114736"
Community content is available under CC-BY-SA unless otherwise noted.