Edith Lawson is one of the pre-made NPC Music and Dance hobby instructors at the My Muse - Music and Dance Studio. She comes from Hobbies, the secret sub-neighborhood introduced with The Sims 2: FreeTime. The other two music and dance hobby instructors are Noelle Dennis and Todd Gergis. Edith appears in every neighborhood once FreeTime has been installed. She can be made playable by befriending and asking her to move in, or by marrying her. Edith has long blonde hair, dark blue eyes, and medium skin. She is a Family Sim with the Cancer zodiac sign. As far as personality, Edith is somewhat neat, active, and nice. But she is quite shy, and somewhat serious. Edith is mostly interested in Weather, Paranormal, and Work.

She has the same facial structure as April Hutchins. Edith's pre-destined hobby is Tinkering. Even though her default head-shot depicts her having long hair, and a cowboy top, when Edith is first spawned in-game, she will have an unused hairstyle, consisting of a red flower, and short hair. She will also wear a red dress with white spots. However Edith will still retain the hairstyle in her default thumbnail, for most outfits besides everyday. When a Sim gains enough enthusiasm in Music and Dance, she arrives to invite them down to take lessons. Edith shares her last name with Kendal Lawson from Pleasantview, and from Strangetown. However, there is no evidence that any of them are related. 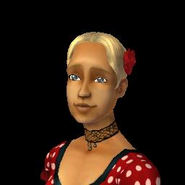 Edith Lawson's appearance in-game.
Add an image to this gallery
Retrieved from "https://sims.fandom.com/wiki/Edith_Lawson?oldid=840587"
Community content is available under CC-BY-SA unless otherwise noted.