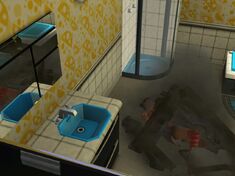 Earthquakes are natural disasters caused by the shifting of Earth's plates; they have been included in the SimCity series from the beginning as disasters with the potential to start fires and destroy a city.

When an earthquake occurs, the screen will shake, and a message will pop up saying that the Sim should check in with the fire station to see if they can help out. Earthquakes can cause fires and gas leaks, and Sims can be buried in rubble after an earthquake. While working on the disaster, the Sim will most likely encounter more than one household with trapped Sims, as well as other havoc. Responding to an earthquake is a good career move for Sims with the Firefighter Hero lifetime wish, as they will usually save 4 to 10 Sims from rubble.

Earthquakes can be caused by Sims, but they can also be triggered by the player with the use of cheats: if the player has a Sim in the firefighter profession, they can turn on testingcheatsenabled and shift-click any lot to "Spawn Job" and select the earthquake disaster. This will cause an earthquake if this cheat is used on the right lot.

In The Sims 3 for console, earthquakes comes in the form of a bad karma power, "Quake Maker", which causes the screen to shake with objects breaking and fire erupting around the lot, terrifying witnesses. To unlock it, the player must spend 20 karma points on it.

Earthquakes return in The Sims 4: City Living as a lot trait. If a lot has the Quake Zone trait, earthquakes of varying magnitudes may occur on it.

Sims 4 City Living - Earthquake
Add an image to this gallery

Retrieved from "https://sims.fandom.com/wiki/Earthquake?oldid=910218"
Community content is available under CC-BY-SA unless otherwise noted.