"It's all about loyalty. Prove yourself with me, you'll have a friend for life. Cross me, and well... you're life won't be WORTH living."

Duke Headbutt is an Urb residing in Urbzville's district, Gasoline Row, of which he is the leader. It seems that he is dating Isis Ice. He runs a chop shop/sausage grill that's infamous throughout the city. He has spent several hard years on the road and is fiercely loyal, and his philosophy is "Live, and let the rest figure it out themselves."

He likes the purr of a happy motor, Body building, and Rowdy howdies. His dislikes are butt jokes, filthy engines, and Canola Oil. Getting to know him will result in being taught the social moves: "Head Butt, Tuck N' Hug 360, and Mock".

In the comix the "Outlaw Angst" by Peter Bagge, Duke's patience is wearing thin due to a newcomer named Jayde arguing with two women, and although she is playing it tough, it is clear she is uneasy about her situation. However she succeeds in cooking up sausages, which Pork Chop happily consumed. But he wants to test her again with the Chop Shop section.

Jayde realizes that Duke is the leader of the group and works to gain his favor, asking for critique on her current attire, to which Duke replies "Hmm... not bad...". This causes one of the women, Sharkey Spitz, to become upset, as it appears she has a crush on Duke. Jayde defuses this situation by preforming the social move "Body Slam" on her. She gains instant favor with the group.

Duke however still wants to test her skills and asks her to customize a tricycle. Once again Jayde succeeds and Duke is finally impressed. 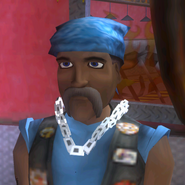 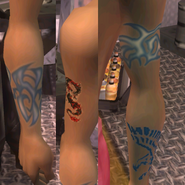 tattoo reference
Add an image to this gallery
Retrieved from "https://sims.fandom.com/wiki/Duke_Headbutt?oldid=875273"
Community content is available under CC-BY-SA unless otherwise noted.