Dudley Landgraab[BO] (or Dudley Landgrabb[TSC]) is the son of Malcolm Landgraab, the former step-son of Mom, and the brother of Mimi Landgraab. He is a member of the wealthy Landgraab family and appears in The Sims (Console) and The Sims Bustin' Out.

Dudley first shows up at the beginning of Reality Bites if the player's Sim is a male. He let's the Sim stay for free but the player has to clean up the house because Dudley and his friends trashed it while partying. After the player completes that level, Dudley will invite the player's Sim to be his roommate at the Party Animals house.

Unlike many other Sim in the game, Dudley is unwilling to skill-build, change careers, clean up, cook meals using the fridge, and answer the phone. However, he is willing to eat snacks, grill, and go to work.

Dudley is on the Slacker career starting out as a Golf Caddy, but usually gets promoted to Convenience Store Clerk after going to work the first time. If Dudley misses work two days in a row he'll get fired and the player will get a Game over from it.

Like Mimi, Dudley knows all the members of the Roomies household. Strangely he doesn't know the other members of the Landgraab family as they don't appear in his relationship panel.

Choosing the Gangster, Mad Scientist, Jock, or Paramilitary career allows the player's Sim to move in with Dudley. Sims are able to live in Dudley's Trailer until they have received two promotions in their career track.

Dudley's signature social interaction is to burp in other Sims' faces.

Dudley Landgraab's face in The Sims Bustin' Out Create a Sim. 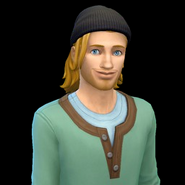 Dudley Landgraab as he appears in The Sims 4
Add an image to this gallery
Retrieved from "https://sims.fandom.com/wiki/Dudley_Landgraab?oldid=876563"
Community content is available under CC-BY-SA unless otherwise noted.