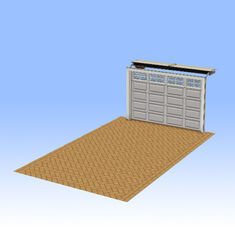 A driveway is an object in The Sims 2: Nightlife and The Sims 3 that allows Sims to park their cars.

Driveways are available from build mode unlocked if either Nightlife or FreeTime is installed. If they do not have any of those expansions, they can still download and use custom driveways as long as they have at least one expansion pack after Nightlife.

In The Sims 2, a car must be placed on a driveway or driveway extension. The driveway must be connected to the street, and is very large. There is a 5x8 section where cars can be placed on, a 5x2 section that connects the driveway to the street, and a 12x3 section that overlaps the street. The street sections can overlap with each other, allowing multiple driveways to be placed side by side. If the lot is on a corner, a driveway must be placed on the side of the street where the mailbox is. Normally, a driveway cannot be placed unless there is room for the entire street section; however, later expansions allow the player to override this by using the moveobjects on cheat. Players should note that, if a lot is reset after adding a new expansion pack (or after adding some mods), driveways placed in this manner may cease to be recognized as being present, and cars placed on them may disappear. If this happens, the player will be able to re-buy the driveway after saving the lot, exiting it, and then re-entering it. Driveway extensions and cars on them will not be affected by this.

In The Sims 3 the driveway is 3x7[1] and can be placed anywhere in the lot; cars will always teleport onto the road rather than playing an animation. Unlike The Sims 2, driveways function as usable parking space on community lots, and non-playable Sims can park their cars there.

Retrieved from "https://sims.fandom.com/wiki/Driveway?oldid=855210"
Community content is available under CC-BY-SA unless otherwise noted.