Drew Allison Carey (born May 23, 1958) is an American comedian, actor, and game show host. After serving in the U.S. Marines and making a name for himself in stand-up comedy, he eventually gained popularity starring in his own sitcom, The Drew Carey Show, and serving as host on the U.S. version of Whose Line Is It Anyway?. Carey has appeared in several films and television series, and has written an autobiography. Since of 2007, he is the host of the game show The Price is Right.

Drew Carey makes a cameo appearance in The Sims: House Party as an NPC who appears in a limo when the player holds a successful party. To open up the doors to this celebrity guest, the party has to have lasted at least 135 minutes and have reached a party score of at least 55. When he appears, he will greet almost any Sim on the lot, including ghosts. As an NPC, there are no social interactions available for him. All Sims on the lot, including pets and servos, will continue to think about him for the duration of the party.

The Sims made two cameo appearances on The Drew Carey Show, which can be viewed on YouTube. In the first clip, the characters appear as Sims. In the In the second clip, the actors are speaking Simlish and their thoughts and dialogue is conveyed through thought and speech bubbles. 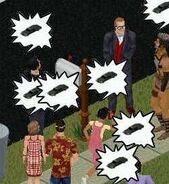 There is a page on Wikipedia dedicated to this real-world topic. Click here to view this article's associated Wikipedia page.
Retrieved from "https://sims.fandom.com/wiki/Drew_Carey?oldid=920893"
Community content is available under CC-BY-SA unless otherwise noted.