The Sims Wiki
Register
Don't have an account?
Sign In
Advertisement
in: Premade families, Families with 4 generations, Families from The Sims 2 (base game),
and 8 more
English

The Dreamer family is a pre-made family from Pleasantview in The Sims 2, as well as Lucky Palms from The Sims 3 Store.

The family in The Sims 2 consists of aspiring artist Darren Dreamer, and his son, Dirk. Darren and Dirk live at 195 Main Street in Pleasantview. Darren's wife Darleen is deceased, and her grave is on their lot.

The family is low on money, with only §968 in funds, and three sets of overdue bills to pay. Also, Darren wants to win Cassandra Goth's heart and get married to her, but is Don Lothario standing in his way?

Both sets of overdue bills are white, which is not possible in normal gameplay. The family should have enough funds to pay them right away, but that will take a large portion of its available funds. When loading the lot for the first time, the player is met with the following notification:

"Darren Dreamer wants to paint for a living, but does he have the skills to pay the bills? Those past-due statements are starting to pile up..."

In The Sims 3, the family consists of Darren who currently lives alone in Lucky Palms. He is quite well known in-town, being somewhat rich with §20,000 in household funds (compared to only §968 in The Sims 2), as well as being a celebrity. Darren is currently dating his to-be wife, Darleen, who is currently living with her parents.

In The Sims 4, the family consists of Dirk Dreamer (The Sims 4: Get Famous) who might be the alternate universe version of Dirk Dreamer from Pleasantview. He is a four star celebrity with a good reputation and no relationships.

This family has a theme of having names with the initials D.D., even among most of the ancestors.

Dreamer: A person who lives in a world of fantasy; one who is impractical and unrealistic.
Darren Dreamer: Great or it could mean (Daring to dream) motivated to do things no one would do.
Darleen Dreamer: A slang-like term for "Daring" From combination of darling and popular name suffix -leen.
Dirk Dreamer: a type of dagger.

There is no relation at all to the etymology of the Dreamers, except for the surname. The only interesting bit is that all of the names start with the letter "D". To follow that, there would be a limited choice of the names they could be, and an even more limited choice of etymology references. It is also interesting to note that Darren's name can be twisted to mean, "great dreamer."

Davis Dreamer: Derived from David, meaning beloved.
Delilah Dreamer: Means "delicate".
Dalmar Dreamer: Form of Delmar, meaning "of the sea" in Spanish.
Dacia Dreamer: It could be Daisy, or Dacia, an old Roman province, now Romania and Moldova.
Darong: An anagram of Dragon.
Sef Darong: It could be a form of Seth, an Egyptian god of the desert, the night and enemy of the sun, or Seth, the third son of Adam and Eve.
Lina Darong: Means either "palm tree" or "tender" in Arabic. 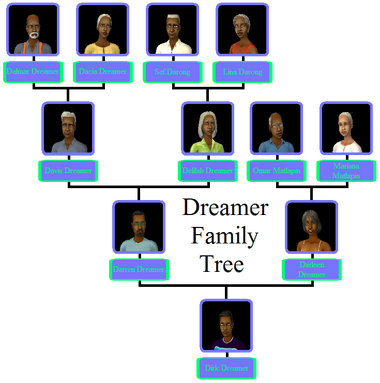