Not to be confused with Dragon (villager).

Dragons are mythical creatures available as pets in The Sims: Makin' Magic, Dragon Valley from The Sims 3 Store, The Sims FreePlay, and The Sims 4: Realm of Magic.

Dragons can be acquired as an NPC pet that will reside on the lot. Functionally they are very similar to cats, though they are not added to the family and are fully autonomous.

Dragons are hatched from Dragon Eggs, which can be purchased from Vicki Vampiress in Magic Town for 49 MagiCoins. Vicki's cart also sells dragon treats and toys as well, which are needed to care for the dragon. There is no limit on how many dragons can be owned by a family.

There are a number of benefits to having a dragon over standard pets. When groomed they may drop Dragon Scales, and when tickled they may drop Dragon Tears, both of which are valuable magic ingredients for spell and charm making. They also have few motives, and are able to mostly care for themselves with a little provision. The one downside is that they are very dangerous pets, able to start fires and potentially kill Sims.

There are three different colors of dragons that can be hatched: red, gold and purple. Each one has a different name and temperament.

Upon purchasing a dragon egg, Sims will place it on the lot and can interact with it. They can cradle the egg, rotate it, or play music to it. After 36-48 hours the egg will hatch, and the dragon that will emerge depends on how many times Sims interact with the egg.

The nest should be kept after the dragon hatches, as they will use it as a bed.

Caring for a dragon[]

Dragons have few motives: Hunger, Fun and Energy. They will never need to urinate or bathe, and don't require comfort. There is no way to view their motives, but they will display thought bubbles when in need of attention.

Dragons will sleep in their nest when tired to recover energy, and will play with other dragons, cats, dogs, and enchanted gnomes to satisfy their Fun need.

Dragons eat spoiled food, trash, pet food, and primarily flowers, particularly yellow daffodils. When flowers are eaten the object will be deleted and will need to be replaced. Toads are a special dragon delicacy, so caution must be exercised when using the Toadification spell as a Sim who is turned into a toad and eaten by a dragon will die instantly.

Sims should interact with their dragon frequently and restock on dragon treats and toys from Magic Town. Besides torching various items around a lot, dragons can torch visiting Sims as well, resulting in the death of the victim.

Neglected dragons will start fires more frequently, and if severely neglected they will permanently move out of the household never to return. Another dragon can be acquired from a new dragon egg.

Dragons return as interactive small pets that can hatch from dragon eggs. A dragon egg can be purchased in buy mode for §395. There are four types of dragon: Green, Purple, Red, and Armored Black. Each dragon will give a special moodlet when Sims hold them, which will increase certain motives: energy and hygiene for red dragons, hunger and bladder for green dragons, fun and social for purple dragons, and energy and hunger for armored black dragons.

A green dragon is a dragon that hoards and protects treasures. It also helps Sims with gardening. A purple dragon is a dragon of sunshine and happiness that also loves to socialize and party. A red dragon is a fearless and aggressive dragon that can torch the enemies of Sims and singe them. The armored black dragon is a mysterious dragon. It has the ability to transform Sims into zombies[TS3:SN], summon ghosts, and reward the Sim with a death flower. The armored black dragon is only available if The Duke of Bows Renaissance Faire Venue, which can be downloaded separately, is also installed.[1][2]

The chances of hatching a particular type of dragon can be increased by using certain interactions while it's still an egg. "Gossip About Love of Fire" interaction increases the chance of getting a red dragon, "Talk About Friends" for a purple dragon, "Talk About Weather" for a green dragon, and "Converse about Existentialism" for an armored black dragon.

Dragons return in The Sims FreePlay, in the Wizards and Witches update, which also includes spell casting, broom riding and other themed objects. Dragons are pets which Sims can own.

Dragons can only be attained in a limited time which is set when the quest Book of Spells is activated, then on users have 1 week to complete the quest in order to obtain the option to buy a dragon, if missing the offer users will complete the quest but cannot gain the dragon therefore. However, if users reset the game they can do the quest and try to complete within given time and try again.

Once rewarded, users can buy dragons within the Pet Store users get if they built the place.

Dragons come in many types with different ranges.

Dragons are immediately put in the game as an egg in which will be hatched in a day.

When hatched, the dragon will act as a normal pet like dogs or cats, but will fly around instead of moving as well as roll up other than laying down.

Dragons can help discover simoleons and life points if the user presses on their icon when they've found something. Dragons also have a better chance at earning more simoleons as well as life Points.

Dragons are a type of familiar in Realm of Magic. They have black and purple scales, horns and wings. Their rarity is uncommon.

A purple dragon using one of its powers. 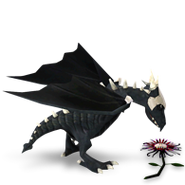 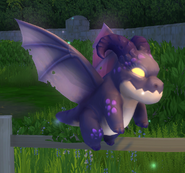 A dragon familiar in The Sims 4: Realm of Magic.