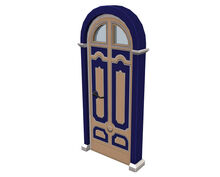 A door from The Sims 2: Mansion & Garden Stuff.

A door is an architectural object in The Sims series that allow Sims to pass through walls. All doors open automatically when a Sim approaches, and will close shortly after the Sim has gone through.[n 1] Certain doors come with windows that allow light to pass through.

Doors, like walls, provide a privacy barrier that Sims cannot see through, even if the door has a window. This allows Sims to perform actions that come with an expectation of privacy, such as using a toilet, bathing, or WooHooing, behind a door. From The Sims 2 onwards, other Sims will not be able to enter until the Sim has completed or cancelled the action, unless they have a romantic relationship with the other Sim. A known glitch causes this privacy locking setting to occasionally be ignored, allowing anyone to pass through the door and walk in on Sims.[TS2]

The Sims does not include the ability for the player to lock doors, though lockable doors are available as custom content.

The ability to lock doors is first introduced in The Sims 2: Open for Business[n 2] and in The Sims 3: World Adventures. Doors can be set so that only members of the current household, household members and employees, or just the currently selected Sim are allowed access. They can also be locked to prohibit all Sims, excluding service NPCs, from passing through. In The Sims 2: Pets, pets can be denied entry through a door, and in The Sims 2: Apartment Life, apartment neighbors can be denied entry into an apartment unit. The Sims 3: University Life expands the feature so that individual Sims can be granted access or prohibited from using a specific door.[1]

In The Sims 4, the ability to lock door returns in patch 21. Like The Sims 3, players can restrict doors for individual Sims.

While door locking settings are usually honored, in some circumstances they may be completely ignored, such as a burglary, a repo-man visit, or a confiscation made by the social worker.

In The Sims 3: Ambitions, a firefighter Sim on duty may be required to rescue a trapped Sim in a locked room or through a series of rooms, having to chop down the doors with an axe in order to gain access.

Most doors function similarly to each other, and only differ in their cosmetic appearances. However, there are some doors that function differently.

The Zeddy-Lock Celebrity Security Door in The Sims: Superstar only allows Sims with at least three fame stars to pass. This allows for the creation of rooms that only celebrity Sims can enter, and can be used to protect awards from being stolen by the Obsessed Fan. The Sims 4: Get Famous includes the Starlet's Repose Door which also enforces a three-star restriction. The door and a dressing room will appear on the Plumbob Pictures studio lot when a Sim shoots a film there.[confirmation needed] Get Famous also includes three VIP doors that players can use to select the fame requirement needed for access. When set with a restriction, a bouncer will be generated to control Sims' access through the door.

The Sims 3: Late Night does not feature celebrity-only doors in the same manner as Superstar and Get Famous, but barrier ropes can be used to restrict entry through any door it is placed in front of on community lots.

This section describes features that are only available in The Sims 2: Nightlife.

Garage doors must be placed between a driveway and a driveway extension piece, and will open whenever a car passes through it. Sims can also pass through garage doors like any other door, although they cannot lock garage doors to restrict access.

This section describes features that are only available in The Sims 2: University.

Split
It has been suggested that this article be split into one or more articles because of Too long for a door type. Include Sims and item of the room, which are not directly related. Duplicate with the one in Dorm page..
For details and discussion, see the talk page.

The Myne Door is used to designate individual dorm rooms, and are found in all premade dormitory lots by default. Sims can use the doors to claim ownership of the dorm rooms behind it. When building or modifying a dormitory, each Myne Door must be placed so the picture frame faces outward, and the Myne Door should be the only way in and out of the rooms behind it. This means that multiple-occupancy rooms are not possible, nor are "suites" in which two dorm rooms share a bathroom.

When a Sim claims the door their headshot will appear on the door and only that Sim will be able to modify access permissions for other Sims. The headshot will not change if the Sim's appearance is modified, but the player can update the picture of a playable Sim by having that Sim unclaim and reclaim the room. Dormies that move into the dorm also claim rooms; players are given a slight head-start (about an hour of game time) to claim the rooms they want the playable Sims to have. A playable Sim told to lock or unlock his or her door will hang or remove a standard "no entry" sign, which will allow or prevent other Sims from entering their dorm room. Dormies may also lock their doors, and playable Sims must knock in order to gain entrance.

The door can be used on normal residential lots outside of the college neighborhood to claim "ownership" of a room. Children cannot lock these doors, likely because they lack the needed door locking animation for the interaction to work.

Door of Life And DeathEdit

The Door of Life And Death allows the player to summon the Grim Reaper. Sims can use it to ask the Reaper to reincarnate a deceased Sim, become impregnated with the genes of another Sim, or challenge the Reaper in a guitar duel to become immune to death. There is a slight chance that Sims will be dragged under the doormat by a pit monster and subsequently killed when attempting to summon the Reaper.

Doors with male and female variations were first introduced in The Sims: Hot Date, and were reintroduced in every game after. These doors prevent Sims of the opposite sex from passing through, and are primarily used to construct single-sex bathrooms on community lots. Service NPCs will ignore these gender restrictions, although employees on an owned business, along with members of the owner's household, may not be able to.

The Sims 2: Apartment Life and The Sims 3: Supernatural feature a bookcase that also functions as a hidden door. Players must manually direct Sims to use the bookcase in order to pass through it; Sims will not autonomously use it when told to route to a location behind the door.

The Sims 3: World Adventures introduces a hidden door that blends in with the wall and will only appear when used or when triggered by another object. Certain locked or hidden doors in tombs may require a certain puzzle to be solved in order to make rooms behind the entrance accessible for the exploring Sim.

The Sims 4: Cats & Dogs and The Sims 4: My First Pet Stuff introduce pet doors. The smaller doors are ideal for small dogs and cats while the larger doors allow larger pets and toddlers to pass through.

Retrieved from "https://sims.fandom.com/wiki/Door?oldid=859755"
Community content is available under CC-BY-SA unless otherwise noted.