Dong Huo is a mummy who was buried in Shang Simla some time ago. He is said to have been a ruthless, strong, yet despised tyrant who serves as the main antagonist of some Shang Simla adventures. He is mostly known for "stealing" valuable relics from the other Sims, whose descendants want these relics back. His treasures are mostly hidden in a tomb beneath the Market. His most prominent appearance is during the adventure called "Prophecy of the Dragon Cave". It is here revealed that Dong Huo was eventually sealed in The Dragon's Maw by James Vaughan, and the keystone was brought to Champs Les Sims, in France. However, Vaughan seems to have not completely succeeded to lock Dong Huo, and a prophecy states that only one Sim, a high-level tournament-winning martial artist, could defeat him forever. 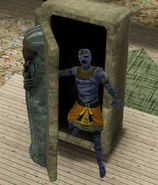 Add an image to this gallery
Retrieved from "https://sims.fandom.com/wiki/Dong_Huo?oldid=821889"
Community content is available under CC-BY-SA unless otherwise noted.