Don Lothario is one of the pre-made Sims who lives in Pleasantview in The Sims 2 and Riverview in The Sims 3. He reappears in The Sims 4 and resides in Oasis Springs, where he has been given a significant appearance change. The Sims 4 is confirmed to be in an alternate reality, so Don's life doesn't follow the previous series' continuity.

Don Lothario resides in Pleasantview, one of the neighborhoods that ships with The Sims 2. He has black hair in a Pompadour hairstyle, and wears a maroon striped top and blue-grey jeans. According to the neighborhood back-story, Don is the local womanizer, holding down relationships with four women at once. He is in love with both of the Caliente sisters, Nina, with whom he had his first kiss, and Dina. He appears to prefer Nina over Dina. His other lovers include Cassandra Goth to whom he is engaged at the start of the game, and Kaylynn Langerak, a maid. Don is also involved in the plot surrounding Cassandra's mother, Bella. The back-story tells players that Bella was mysteriously abducted and never returned home. However, she was supposedly last seen at Don's home and rejected his attempt for 'Making Out'. It is said that Bella went to Don's house to welcome him to Pleasantview and was never seen again.

Don is the only child of Adriana Lothario and Nicolo Lothario. When first playing the Goths, Don and Cassandra will be in the backyard, which will be set for a wedding. If the player tries to marry them right away, Don will usually leave her at the altar unless their relationship is improved. (Being a romance Sim, he has a negative memory of getting engaged to Cassandra. However, he will get a positive memory of a successful marriage to her, as romance Sims don't get negative memories for marrying rich Sims.)

He lives in a messy condo at 150 Main Street, which he does not appear to look after, given his low Neat score. He has around §980 in funds. He is remarkably similar to his father, having the same hairstyle, skin color, eye color and facial hair. Don is just short from having top fitness, yet he has no body skill points. He may have lost these points when he got an electric shock, as his memories may suggest. He seems to take after his paternal grandparents, Carmelo and Mama, as he shares their romance aspirations, while both of his parents and maternal grandparents have the fortune aspiration.

Don Lothario appears to have composed a self-help CD series: the BENNO CD Tower, a Sculpture item from the IKEA Home Stuff pack, mentions "the complete Don Lothario self-help CD collection" in its description. Even though he is a womanizer, he has no charisma skills - contrary to what players would think about him. In one of the Goth family storytelling images, he has an unused hairstyle. He also has a memory of meeting Mortimer Goth, but he doesn't appear in Don's relationship panel.

Life leading up to The Sims 2 for console[]

In The Sims 2 for consoles, Don is a womanizing mean fellow who loves to WooHoo. He and the Caliente sisters, despite clearly being full-grown adults, live at a youth hostel owned by retired boxer Toothless Joe. The player gets access to the hostel by letting fashionista/jester Larry Liu run, causing unbridled chaos in his boss, Chantal Leer's, stately Oriental home. Despite the social 'Talk' being a common and safe interaction to use, Don will always change the topic to food and discuss his hatred for it. This will cause the 'Talk' social to fail 100% of the time. Don Treadwell also has this issue. He looks very similar to how he does in the PC version of The Sims 2, wearing the exact same clothing. However, his skin and eye color appear somewhat different, and interestingly, his hairstyle is remarkably similar to the scrapped hairstyle he's seen wearing in some of the PC version's photo albums.

Don appears in Riverview. The family bio reads "Don woke up one morning in a whole new world. He remembers stepping onto a teleporter, several women laughing, then nothing else until he found himself here..." "Here" refers to an old granary, abandoned for years and waiting for nature to demolish it, that is, until Don showed up. Don's bio reads "Don Lothario was facing a big choice between marriage and continuing to be a man about town. Will his "accidental" teleportation to a new town change his old ways?" It's possible that the laughing women are (some of) his lovers, though that is unconfirmed.

There is no sure way of knowing how he was teleported into the sleepy town of Riverview, but afterward, Don seems to have either simply moved into the old granary or bought it somehow. (He possibly worked for some time.) Don's story in The Sims 3 seems to have started a few days after Don was teleported to Riverview since the old granary was (poorly) furnished and Don owns a car. One theory is that the granary was owned by the McDermott family, then Don appeared and they gave it to him as a house (since Don knows Luke McDermott and he does have a huge farm nearby). This is also hinted at in a preview for Riverview in which Don teleports into the McDermott garden. His appearance changed a bit; he now has lighter skin and a new shirt. Oddly, while Don was fit in The Sims 2, he is thin in his appearance in Riverview.

Since Riverview includes younger versions of Betty Newbie, Bob Newbie, and Skip Broke, while Don looks like he did in The Sims 2, it appears that his incident involved time travel.

Don was the only character for whom the events of The Sims 3 apparently follow on from those depicted in The Sims 2 (that was, until the Caliente sisters returned via Barnacle Bay). For all the other returning characters, the game acts as a prequel rather than a sequel to the previous titles. Therefore, Don's chronology within the series is unique. As in The Sims 2, Don has the personality of a Casanova and he has the lifetime wish to become a heart breaker.

Don appears in Oasis Springs in The Sims 4 base game, residing in a house with Dina Caliente, Nina Caliente, and their mother Katrina Caliente. It has been confirmed that this version of Don exists in an alternate universe to that of previous games.

Don is a young adult, 24 days away from becoming an adult. He has a tattoo on his right upper arm. He is also very fit, very much in line with his traits. Despite the family bio suggesting that he has moved in to the household as Katrina's boyfriend, he is in fact only acquaintances with all three Caliente women. Although not explicitly stated, it appears Don living with the Calientes is a recent event, as Don's "bedroom" appears far smaller, and not particularly decorated.

The household bio also hints that he will eventually become involved with Dina and Nina, as in previous games. Don is unemployed at the start of the game, and has three skill points in fitness. Like his original timeline counterparts, his aspiration is to carry on multiple romantic relationships.

Beta screenshot of Don dancing with a mop. NOTE: unused accessory as his hairstyle (seen in one of the preview images from The Sims 2 Installation)

Beta screenshot of Don Lothario reacting to fire. NOTE: the hair and fire appear differently in the final game.

Don and Cassandra in Cassandra's backyard.

Don's appearance in The Sims 2 (console).

The granary that Don lives in from The Sims 3. 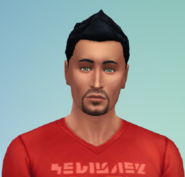 Don Lothario in The Sims 4.

Don makes an appearance in the gameplay demo. 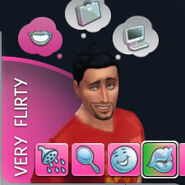