The Sims Wiki
Register
Don't have an account?
Sign In
Advertisement
in: Animals, Pets, Dogs,
and 5 more
English

A puppy and its mother in The Sims 2: Pets.

Dogs are pets that can be bought or sold in The Sims: Unleashed, The Sims 2: Pets, The Sims 3: Pets and The Sims 4: Cats & Dogs. They are one of the more common pets that Sims can own, along with cats.

Dogs were introduced in The Sims: Unleashed. A family can adopt a dog by going to the Pet Center in Old Town, or a Sim can befriend and adopt a stray. However, pets cannot be created in Create a Sim. Sims can pet the dog or wrestle with it for fun. Children can also play tag with dogs.

Dogs can be taught three skills: obedience, tricks, and housebreaking. Dogs must be housebroken by praising them when they relieve themselves outside and scolding them when they do it inside. A dog may or may not try to drive El Bandito the raccoon off a lot, but will ignore burglars.

Dogs can only be bathed in the Squeak-EE-Clean Pet Tub, and cannot be bathed in normal bathtubs used by Sims.

The pre-made dogs belonging to playable households in The Sims: Unleashed are:

In The Sims 2: Pets, dogs may be created in the Create a Pet section of Create a Sim. Sims can adopt dogs or puppies using the phone, by buying them on community lots that sell pets, or by forming a friendship with a stray dog and adopting them. Players can also get a pet dog in Apartment Life by buying the pet cage in the pets section of buy mode, although these dogs are "decorative", and are considered as small pets.

In Pets, dogs come in two sizes: small and large. Regardless of breed, all small dogs are the same size, as are all large dogs. A dog's size affects how long its adult life stage will last. A small dog will live for 25 days as an adult, while a large dog will be an adult for 22 days. Aside from that, small and large dogs are treated the same.

The wolves that are sometimes seen wandering the neighborhood, including the leader of the pack whose bite creates werewolves, are a variation of large dog. Other than the pack leader, they can be adopted like other strays. Wolves can be bred with dogs.

After a dog becomes an adult, a Sim can stroke the dog, rub its belly, or feed it a treat. Sims can play fetch with a dog, or can play a razzle game with it. A Sim can take a dog for a walk, which will relieve its bladder need. Dogs can also dig on empty terrain, which will lower their hygiene motive and leave a hole that must be manually filled in. They will also greet mail carriers as they arrive on the lot.

Unlike their counterparts in Unleashed, puppies in Pets are mobile and largely self-sufficient. They can feed themselves, if there is food available, and sleep on pet beds without the help of a Sim or their mother. Puppies can also learn behaviors, so they can be housebroken. However, puppies cannot go up or down stairs without the help of a Sim. If a house is on a foundation, even a well-housebroken pup will need a Sim's help to relieve its bladder. Also, puppies cannot get jobs or learn commands. Puppies are all the same size, regardless of what size they will be as adults.

Dogs are also able to get their own careers. There are 3 pet careers: Show biz, Security, and Service.

Dogs have the same needs as human Sims, except they need to chew and they don't care about environment.

The pre-made dogs belonging to playable households in The Sims 2: Pets are:

Dogs in The Sims Pet Stories are just like the ones in The Sims 2: Pets, except that they can use story reward objects (such as a-frames, tunnels...) to work on skills for the pet show.

The pre-made dogs belonging to playable households in The Sims Pet Stories are:

All three neighbourhoods of Sims Pet Stories also feature a full predetermined list of both stray and adoptable premade cats and dogs, that differ for each neighbourhood and do not match the Sims 2: Pets lineup.

Dogs in The Sims Castaway Stories are actually hyenas. Their appearance has changed, though all of the options from The Sims 2: Pets are still available (e.g., Stroke, Razzle, Feed treat, etc.), although they cannot get jobs. Felicity Island and Wanmami Island both have thier own predetermined set of hyena 'townies'

The dog needs consist of hunger, energy, fun, social, bladder, and destruction.[1] When their destruction need is too low, they might use chew an inanimate object, which can range from a toy to a statue. They can also use guard on a wide variety of objects, from food bowls and toys to the entire house. They can get a job in The Sims 3: Pets for console, but not in PC version.

A dog can distract a burglar that is present on the lot by playing with them.

The pre-made dogs belonging to playable households in The Sims 3: Pets are:

Dogs return as one of the two major pets in The Sims 4: Cats & Dogs. They appear largely similar to those in The Sims 2: Pets. Dogs are not directly controllable, however, Sims with higher pet training skill can order their dog around much more efficiently. Using mods reveals that dogs' needs are bladder, hunger, energy, play, affection and bowel.

Dogs come in two sizes: large and small. Sims can do various interactions with them such as playing, petting or taking for a walk. Dogs can also be sent to explore the surrounding neighborhood by Sims who have achieved level three in the pet training skill. When done so, the dog will leave the lot and go search mystery boxes that contain various pet toys and collectibles. Dogs will usually become dirty during their explorations, forcing Sims to bath them in order to avoid negative emotions from the smell. Dogs can also be taught various commands relating to tricks and other interactions. Learned behaviors are not visible, but commands can be seen through the "Training..." or "Trained Commands..." options when interacting with dogs. Smart dogs start off already knowing one command.

Dogs, like cats, can become sick over time. There are various forms of illnesses that they can get infected by and Sims can go to vet clinics to get their pet cured. Sims with high levels in the veterinarian skill can also choose to cure their dog with their own methods.

Dogs require a food bowl in order to be properly fed, but Sims can give them small treats for 5§ and pieces of leftover food. Dogs have to be taken outside to fulfill their bladder and leaving them inside will end up in filthy messes. Sims can discipline dogs for relieving bladder inside, and various other things such as barking loudly, begging for food and playing in trash. Dogs can also develop various fears or interests towards objects. For example, dogs can become interested towards televisions and stare at them for long periods of time during the day, or they can develop a fear towards robot vacuums, making them scared every time the object is on. Dogs will usually sleep on couches and pet beds. Large dogs will require a large pet bed to sleep in, while small dogs can sleep in both large and small pet beds. Large dogs cannot sleep in normal beds alongside Sims. Dogs of both sizes can swim in pools as well as in open bodies of water, but they cannot drown.

Dogs have a few unique traits, but others they share with cats. For example, both dogs and cats can be gluttons, and the active trait in dogs is equivalent to the frisky trait in cats. Selecting a pre-made dog breed in Create a Pet will automatically add a suitable (but removable) trait or two. Dog traits affect how they perform, hunt and are interested towards Sims.

Foxes exist as well and are present as a small dog breed. Foxes have unique voices and be created in Create a Pet. They can also be adopted by Sims and can mate with other dogs. The default traits for foxes are independent and troublemaker. Aside from their appearance and voices, however, they act and behave like normal dogs.

If The Sims 4: Cottage Living is installed, dogs can protect chickens and rabbits from wild foxes by scaring them off. The foxes in this pack are not considered to be dogs, and cause glitches if they are added to a playable household or edited in CAS.

The pre-made dogs belonging to playable households in The Sims 4: Cats & Dogs are: 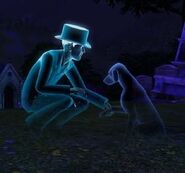 A ghost and a ghost dog.

A Sim walking a dog in The Sims 4. 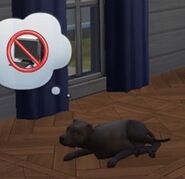 A dog expressing discontent for a computer in The Sims 4. 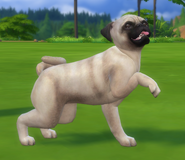 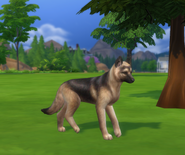 A German shepherd in The Sims 4. 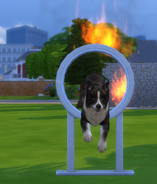 A dog leaping through a flaming hoop in The Sims 4.