Dina Caliente (previously Bachelor) is a pre-made playable Sim in The Sims 2, The Sims 2 for consoles, and appears as a young adult in The Sims 3 and The Sims 4.

Dina appears in the downloadable neighborhood, Barnacle Bay, along with Nina. She and her sister are young adults here, while in The Sims 2 they are implied as being older. She is presented as a heartbreaker, which is odd considering she was a fortune Sim in The Sims 2.

What's even more odd is that her sister has the mooch trait, but she doesn't, even though she had the fortune aspiration and an in-game want to marry a rich Sim. She also has the commitment issues trait, which contradicts with her wish to get married and her positive memory of marriage to Michael. Hot-headed is also off the mark, as the original Dina had moderately nice personality points, and thus would usually respond positively to social interactions.

She has a job in the culinary career at level 5, with 4 skill points in cooking, being 4 points far from the level required for a promotion. This might be a take-off on her original bio, where she's stated to have a liking for chocolate. Since she starts The Sims 2 with no cooking skill, this suggests that Barnacle Bay comes after Pleasantview. This can also be proven in her own bio.

Dina is in love with Alec Trebo, Jeff Smith, and Juan Jr Inkbeard. They are the same men as her sister and roommates are involved with, which causes some tension in the household. Her appearance is similar to what it was in The Sims 2, though her clothes and hairstyle have changed, slightly.

It should also be noted that she has the exact same traits as Don Lothario, another character from The Sims 2. If The Sims 3 Late Night is installed, she and her sister will be 4 star celebrities.

She lives in a small condo in Pleasantview, along with her twin sister, Nina Caliente. Dina is presumably the younger twin, as both their memories show that Nina always grew up first. Dina starts the game wanting to get engaged to Mortimer Goth. She is implied to be a gold digger, as a message pops up when the family is first played saying "Dina is digging for gold..."

Both Dina and her sister are romantically involved with the engaged town womanizer, Don Lothario; apparently each without the other's knowledge. If she catches her sister with Don, her relationship with Nina can be mended quickly, however it may take some time with Don. Another notable relationship is that she and Brandi Broke are just short from becoming friends. Her sister Nina is like this as well.

Dina is very interested in money, fashion, entertainment, arts, and travel. She starts the game with long blonde hair and her everyday outfit is a short, low-necked black dress. When first played, she is in a black bikini, having just been in the hot tub on the roof of their condo. She likes playing in the bathtub and does so frequently.

Though currently single and on the prowl, Dina is the widow of Michael Bachelor; brother to the missing Bella Goth. According to the family album, Dina married Michael when he was an elder, which some players have taken as proof she married him for money. However, she does not have the memory of marrying a rich Sim, and she has a memory of falling in love with him. An apparent anomaly is that, according to her memories, she had her very first kiss with him when she was a teen - even though this could not be accomplished in-game due to the difference in their ages. She had an affair with Don Lothario while married to Michael, but it never went any further than a single kiss. It is not known if Dina took Michael's surname and went back to Caliente after he died, or if she kept the Caliente surname all along (neither of which are possible without the use of hacks or a third-party program such as SimPE.). If Dina adopts a child, Michael will appear on the family tree as the father, though the child will have Dina's last name.

Dina is the daughter of Flamenco Caliente and Nighat Caliente (née Al Mahmoud), now deceased. Their mother died when the twins were children, and their father Flamenco died when the twins were adults. Dina has the same facial structure as their father, while Nina bears a close resemblance to their mother. The sisters are of Arab descent from their mother's side and Spanish descent on their father's side. They are also part alien in their paternal lineage: their grandfather, Nestor Caliente, gave birth to their father after being abducted and impregnated by Pollination Technician 7.

An interesting glitch is that she has a positive memory for Nina Caliente growing up badly, even though this isn't possible without hacks, although this could be a mistake by developers. Dina bears a striking resemblance to her step-grandmother, Dulcinea Caliente, in her adult years. She has the same personality as Herb Oldie.

Despite being one quarter alien, Dina and her sister lack any genetics for the alien skin tone. In the Russian version of The Sims 2, the origin of Dina and her sister's surname is Georgian rather than Spanish. Interestingly, she shares her surname with the assassinated Georgian-Ukrainian journalist, Georgiy Gongadze.

Life leading up to The Sims 2 (console)[]

According to her biography, in The Sims 2 for console, she works in the law enforcement career. Despite this, opening the career tab will show she is unemployed. She is also very ill-mannered and romantic, but has a good relationship with her sister Nina. As in the PC version of The Sims 2, she has long blond hair, but while she has the Fortune aspiration in the PC version, she has the Romance aspiration in the console version.

Dina appears in Oasis Springs and lives with her sister Nina, her mother Katrina, and Don Lothario. She is a young adult, 24 days away from becoming an adult. She is friends with her mother and sister, and acquaintances with Don. The family bio implies that Don and her mother are romantically involved, however this is not actually the case in game. The bio carries the further implication that Don may eventually become involved with Dina and/or Nina as well, as in other games.

Dina works in the culinary career at level 1 (assistant dishwasher). She has two skill points each in the fitness and mixology skills. Like her sister, she has one major personality difference from the original timeline: this version of Dina is active, whereas her original version was very lazy. She does, however, share her romantic inclinations and (as of The Sims 3) her job in the culinary career. 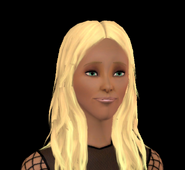 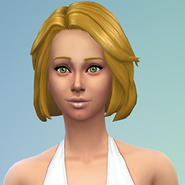 Dina's wardrobe in The Sims 4