His sister, who is also Nora Zeal-Ott's mother, was killed by the Veloci-Rooster. This harrowing incident affected both Nora and Dan quite deeply, and this was probably what motivated Dan to become an officer: to catch the Veloci-Rooster.

In The Sims: Bustin' Out, Detective Dan is a very respectable but slightly unfriendly man. He takes his job seriously and detests corruption. He does have some sense of humor, as he reacts positively to jokes, but he is still difficult to befriend.

However, in The Urbz: Sims in the City, Detective Dan is light-hearted, carefree, amicable and easy to get along with. He is a lot more sympathetic towards the player but he will nevertheless take justice's side if the player is caught breaking a law.

Life Leading up to The Sims: Bustin' Out (handheld) Edit

When Detective Dan is not watching the jail, he likes to visit the General Store, the park, or the beach.

In Mission 1, someone has let Uncle Hayseed's chickens loose. Detective Dan tells the player that it was the work of the Veloci-Rooster and that he has been trying to capture it all his life with no success. He also tasks the player with attending the SimValley auctions which he suspects may be hosting a crime ring.

In Mission 3, the player is trying to reopen Club Rubb. Detective Dan tells the player that the previous owner owed the bank §1000 in taxes, and so Detective Dan was forced to shut the club down. When the player succeeds in raising the money, Detective Dan retrieves the permit from the bank and reopens the club.

Life Leading up to The Urbz: Sims in the City (handheld) Edit

In The Urbz: Sims in the City for handheld, the Detective is transferred to the precinct in Miniopolis from SimValley, as the previous detective was convicted of burglary.

Detective Dan frequents the SimQuarter market when he is out for his lunch break. He hosts basketball competitions at the roof of the jail, and enjoys watching bike races.

In Mission 1, he arrests the player for trespassing the Law Offices and stealing the keys to King Tower. After the player is interrogated, he lets the player out on probation in Urbania.

In Mission 3, he tasks the player to go undercover at the Casino to find clues about a possible crime ring. When one of the perpetrators, Berkeley Clodd, hands the player a briefcase to be given to Giuseppi Mezzoalto, Detective Dan inserts a recording device on the side of the briefcase.

In Mission 4, Daddy Bigbucks has outlawed running within Miniopolis and the Detective is forced to arrest to player for running. The Detective instructs the player to write a letter to the Governor so that he can veto the passed law.

If the player reaches relationship 100 with Detective Dan, he will reveal to the player a secret tunnel that a prisoner dug which leads all the way to the bayou.

Life Leading up to The Sims 2 (Nintendo DS) Edit

Detective Dan D. Mann reappears in The Sims 2 for Nintendo DS. In this game, he is only known as the Sheriff and appears in the Jail. He is the only person who will buy the collectible license plates. 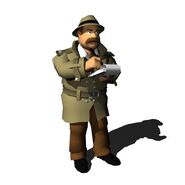 Add an image to this gallery
Retrieved from "https://sims.fandom.com/wiki/Detective_Dan_D._Mann?oldid=825464"
Community content is available under CC-BY-SA unless otherwise noted.