Des Eyre is a pre-made townie who resides in Twinbrook, the world introduced in The Sims 3: Ambitions. At the start of the game, he will be homeless like a townie, but his household would be one of the first to move into an empty lot if story progression is turned on. His name is most likely a pun on the word "desire." He can be made playable by marrying him, or asking him to move in. It is most likely that he will start one of the professions in Twinbrook.

His hairstyle is hidden in the game and can only be unlocked with the unlockoutfits cheat. 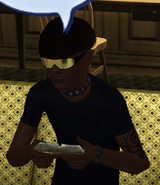 Des Eyre playing a video game
Add an image to this gallery
Retrieved from "https://sims.fandom.com/wiki/Des_Eyre?oldid=911190"
Community content is available under CC-BY-SA unless otherwise noted.