The Sims Wiki
Register
Don't have an account?
Sign In
Advertisement
in: Worlds in The Sims 4, Get Famous, Del Sol Valley
English 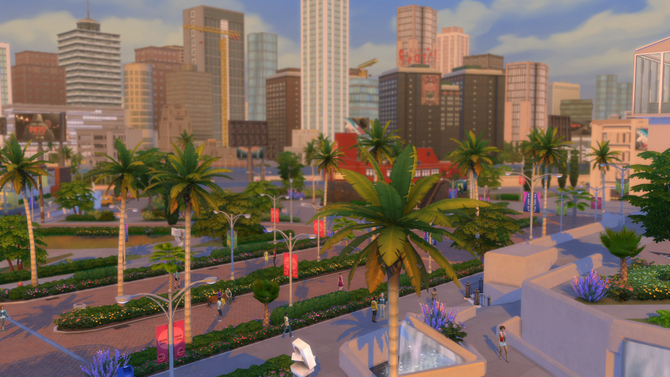 Del Sol Valley is a world that was introduced in The Sims 4: Get Famous. It is a large suburban area of a city, located near an ocean, and is focused on various celebrity Sims, both new and old. It is based on Los Angeles, especially Hollywood and Hollywood Hills.

Assuming the day is nice and clear, The Pinnacles offers a fantastic view of Del Sol Valley

Del Sol Valley is the prime location for a chance at meeting a Proper Celebrity!

Del Sol Valley consists of three neighborhoods and one secret lot that can only be accessed through the actor career. Two neighborhoods have three lots each and one has five lots.

There are a total of 6 residential lots and 5 community lots in Del Sol Valley.

§15,000
Venessa Jeong
Venessa Jeong just moved to Del Sol Valley from her quaint country town. She is looking to make it big as a rising actress. She has starred in a few low level commercials, but her agent always tells her she has what it takes, she just needs to find that breakthrough role.

§50,000
Octavia Moon, Thorne Bailey, Orange Bailey-Moon
Octavia Moon and Thorne Bailey are the power couple of the century. Octavia is the lyrical genius behind all of Thorne's greatest hits. Due to Thorne's most recent mishap on social media, his public image has started to falter. His fans are starting to realize that Octavia is the real talent. Orange is their good natured son but due to his entire life of wanting for nothing, he is also a bit naïve.

§100,000
Judith Ward
Judith Ward is a legend in the acting community. She has starred in everything from comedies to dramas. You name it, Judith has played the role. That's not to say she is an easy person to befriend. Judith has burned her fair share of bridges along the way. Her mentality is to get rich at all costs. She will be the first to throw you under the bus to advance her career. She has been married several times, but all of her partners have only slowed her down. She prefers to live fast and does not settle for mediocrity.

With The Sims 4: Seasons installed, Del Sol valley experiences mostly sunny weather with warm to hot temperatures. Summer temperatures can get as high as a heat wave. Most rain occurs during the cool winter season, when temperatures can drop as low as cold. However, freezing temperatures (and snow) are not experienced in Del Sol Valley without a weather-controlling machine.

Chateau Peak, build in the largest lot in the city

Inner Circle, another simple celebrity starter house , and it is unoccupied