Deer appear wandering in the player's home neighborhood following the installation of The Sims 3: Pets. A Sim can either 'watch', or 'shoo' the deer, although some Sims may be able to 'pet' them. Deer tend to hop instead of run. They have a habit of eating the plants from a resident's garden, forcing players to erect fences and lock gates. Watching and petting deer raises a Sim's Wildlife hidden skill. 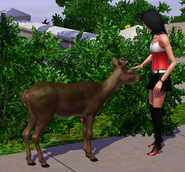 A Sim petting a deer
Add an image to this gallery
Retrieved from "https://sims.fandom.com/wiki/Deer?oldid=851805"
Community content is available under CC-BY-SA unless otherwise noted.