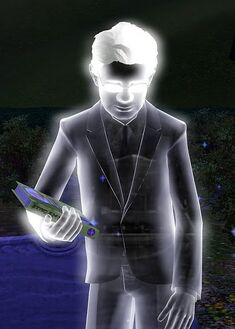 Ghost who died of old age in The Sims 3

When Sims reach the end of their lives, they will die of old age.

In The Sims 2, if a Sim dies with their aspiration bar in gold or platinum, the Grim Reaper and two Hula Zombies will appear and relaxing music will play. The Reaper will flip through his notebook for a few seconds, then the Sim will pick up their suitcase, grab a drink from the Reaper's hand, and walk off with him, while fading away. Otherwise, the Grim Reaper will show the Sim their hourglass of life, and the Sim will try to pull it away from the Grim Reaper, to no avail. When a Sim dies of old age, living Sims will not be able to plead with the Grim Reaper to bring them back from death. However, if FreeTime is installed, a Sim who had successfully wished for the power to cheat death can plead for an extra day of life.

After a Sim who died with their aspiration bar in platinum disappears, a white grave with gold borders will appear. The symbol of the Sim's aspiration, colored gold, will also be on the grave. Otherwise, it will be a normal, grey grave. However, a player should be warned, that in The Sims Castaway Stories, there seems to be a glitch with these types of golden graves: the tombstones are stuck, invisible objects (while the golden urns are okay).

In The Sims 3, death from old age happens much less dramatically, with the Grim Reaper taking Sims away. Sims with the Unlucky trait can only die of old age, as the Grim Reaper finds their misfortunes too hilarious to take them any earlier, and will simply revive them. If there are other Sims not in the same household as the elder (and story progression is on) who are friends or above with the elder, they will receive a phone call when they are close to death, saying that the elder may not be around for long, and that now might be a good time to visit them. When Sims die of old age, they transform into ghosts and look at their wrists. If the player enables testing cheats, shift-clicking an elder and selecting "Trigger Age Transition" will kill the Sim of old age.

The size of the tombstone is determined by how many lifetime happiness points they had at the time of death. This applies to any form of death in The Sims 3.

In The Sims 4, death of old age will occur a few days after the age bar in Simology turns bubbly. The Sim in question will wave goodbye, then fall to the ground with purple mist surrounding them. The Grim Reaper will then claim the Sim, turning the Sim into an urn, or a tombstone when moved outside. The player may engrave the epitaph, letting the player see the epitaph when rolling over the grave.

Another Sim may plead to The Grim Reaper to spare the Sim. This has a chance of succeeding if the Grim Reaper is in a good mood (happy, playful etc.). However, if the Sim is angry, uncomfortable, embarrassed, or in another negative mood, they will ignore the plea. If the plea is successful, the Sim will have one more day to live, unless they have the Potion of Youth to buy them even more time.

In The Sims Freeplay, death by old age only occurs when the player finishes the quest Life Dreams and Legacies. When a Sim dies, they may drop an orb when their life dream is fulfilled. Orbs can be used to pause a Sim's life.

Retrieved from "https://sims.fandom.com/wiki/Death_by_old_age?oldid=884209"
Community content is available under CC-BY-SA unless otherwise noted.