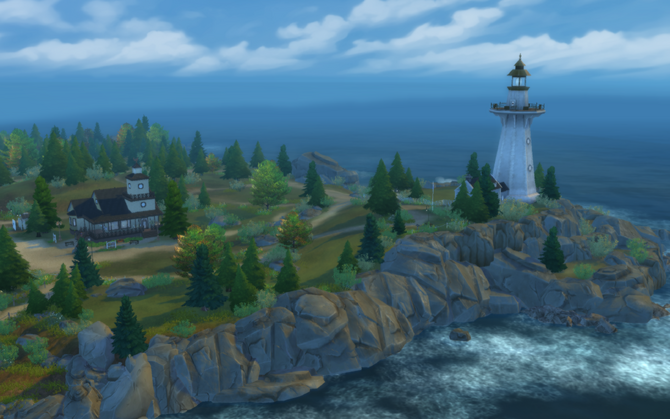 Deadgrass Isle is a neighborhood in Brindleton Bay. It is a remote island of the town. The neighborhood contains no residential lots, and the only active lot in this neighborhood is a museum: Deadgrass Discoveries. Other amenities include a cemetery for pets and a lighthouse.

The lighthouse, called Brindleton Light, is open to visitors and is a possible WooHoo location, while the cemetery is dedicated for dead pets. It is also the second time a cemetery appears in The Sims 4, the first being around the world of Forgotten Hollow in Vampires.

After almost two centuries as the lighthouse keeper’s private home, this property was converted into a museum chronicling the Bay’s interesting maritime history when a new automated system was installed in the Brindleton Light.

Deadgrass Discoveries is a museum located next to the lighthouse.

Brindleton Light is the first lighthouse ever in The Sims 4 to allow Sims to visit. It has a spectacular, appealing view. Sims can also WooHoo in this amenity.

Deadgrass Isle also features a pet cemetery. It is far away from the museum lot and Brindleton Light. The cemetery's residents can be seen walking around the island, mostly during nighttime.

Overview of the isle

Entrance of the pets' cemetery

Another view of the pets' cemetery.
Add an image to this gallery
Retrieved from "https://sims.fandom.com/wiki/Deadgrass_Isle?oldid=794688"
Community content is available under CC-BY-SA unless otherwise noted.