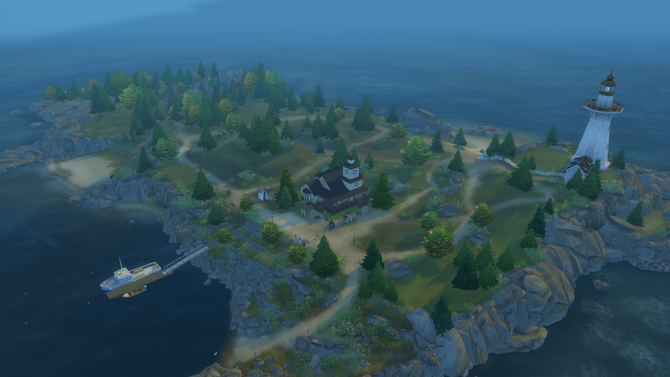 Deadgrass Isle is a neighborhood in Brindleton Bay. It is a remote island of the neighbourhood that doesn't contain any residential lots. The only active lot on the island is a museum, called Deadgrass Discoveries. Other amenities include a cemetery for pets and a lighthouse.

The lighthouse, called Brindleton Light, is located close to the museum and open to visitors. It has a spectacular, appealing view that gives visiting Sims a happy moodlet. It is also a place where Sims can WooHoo. The cemetery, on the other hand, is dedicated to deceased pets and is located far away from the museum. The cemetery's ghostly residents can be seen walking around the island, mostly during nighttime. It is the second time a cemetery appears in The Sims 4, the first being around the world of Forgotten Hollow in Vampires.

According to the description of the neighborhood, a mysterious shipwreck crashed on to Deadgrass Isle's shore and sunk in to the waves. The only survivors of the wreck was a lifeboat full cats and dogs, causing Brindleton Bay to be full of pets, as it is today. The island has then been haunted by the ghost Captain Whitaker, along with other various deceased pets.

"After almost two centuries as the lighthouse keeper’s private home, this property was converted into a museum chronicling the Bay’s interesting maritime history when a new automated system was installed in the Brindleton Light."

Deadgrass Discoveries is a museum located right next to Brindleton Light. On the first floor, there are various paintings of notable Sims who are, in one way or another, related to the mysterious shipwreck. Along with the paintings there is a miniature version of Deadgrass Isle and a small kitchen-like area in the room next to the main hall. The second floor includes a small office room with an easel and the public bathrooms. The third floor consists of a watchtower, where Sims can admire the ocean view.

Retrieved from "https://sims.fandom.com/wiki/Deadgrass_Isle?oldid=930221"
Community content is available under CC-BY-SA unless otherwise noted.