Davey Moans is a pre-made deceased Sim from Barnacle Bay.

He died as a child child and is buried outside the Goldbeard's house. He has pale green skin. He is the only deceased boy who died at the child age and the only child to die in a fire. His name is a play on Davy Jones.

Uncommonly for a male Sim, he wears blush on his cheeks. He is notable for being the only male child deceased in The Sims 3, though there are four deceased female children: Kirsten Remington, Opal Suarley, Wilhelmina Leaf and Marabel Goldbeard. 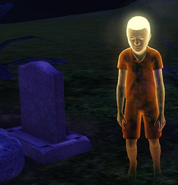 Davey Moans as a ghost. 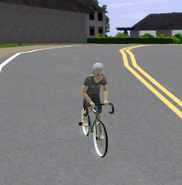 Davey (alive) on a bike 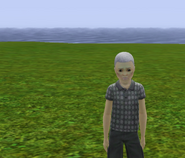 Resurrection tip
This Sim can be brought back to life with ambrosia or with the Oh My Ghost! opportunity. For more information, read Game guide:Bringing Sims back to life.
Retrieved from "https://sims.fandom.com/wiki/Davey_Moans?oldid=886436"
Community content is available under CC-BY-SA unless otherwise noted.