Dave Richardson is a pre-made Sim who appears in some trailers and renders for The Sims 4: Get to Work where he can be seen working as a detective alongside his partner Sierra Moss while dressed in a llama costume.

When removing his costume it is revealed that he is wearing glasses and a watch. Dave can be found in the Gallery where he was uploaded by Maxis.[1] 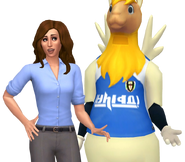 Sierra Moss and Dave Richardson as "Cop and Llama"

Retrieved from "https://sims.fandom.com/wiki/Dave_Richardson?oldid=919084"
Community content is available under CC-BY-SA unless otherwise noted.