Not to be confused with Darleen Dreamer.

This version of Darleen Dreamer is hidden within the game files and can be found with SimPE. She looks very similar to her counterpart with some differences. She wears a white floral sundress while the other wears a purple sweater and tight blue jeans. She also sports an unused hairstyle, and while this one has the fortune aspiration, the other has the family aspiration. Also, unlike her counterpart, she can not be resurrected.

In SimPE she still recognizes Darren and Dirk as family. As she was created with the rest of her living family, it is possible she was meant to be playable. According to her NID, she is the 16th Sim created in Pleasantview. Living Sims are usually created first and their deceased ancestors are added afterwards.

While she does not appear in Dirk's family tree, she is his true mother. This Darleen was 39 days from being an elder when she died. When it comes to her facial structure, this Darleen has a shorter face, a wider mouth, thinner lips, thicker eyebrows, and a different nose. Dirk's facial structure and features bear a strong resemblance to this Darleen, while the Darleen in his memories and family tree bears little to no resemblance. 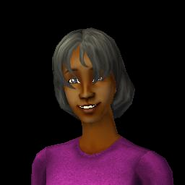 Darleen's appearance in the storytelling images.

The two Darleen Dreamers side by side.
Add an image to this gallery
Retrieved from "https://sims.fandom.com/wiki/Darleen_Dreamer_(hidden)?oldid=875309"
Community content is available under CC-BY-SA unless otherwise noted.