Dai Sekt is a pre-made science geek who resides in Twinbrook, the world introduced in The Sims 3: Ambitions. He visits Sims whose homes are invaded by insects when they first buy it. His name is most likely a pun on the word "Dissect". He doesn't have any skills and relationships at the start of the game. He can be made playable by marrying him, or asking him to move in. He shares traits with Mollie Kewell, his female counterpart.

Unusually for a pre-made adult, Dai only has four traits instead of the usual five. 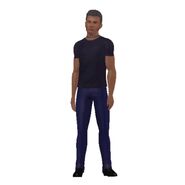 Dai's everyday clothing
Add an image to this gallery
Retrieved from "https://sims.fandom.com/wiki/Dai_Sekt?oldid=905699"
Community content is available under CC-BY-SA unless otherwise noted.