The Turntablitz DJ Booth was introduced in The Sims: House Party, and costs §7,129. It can be placed on residential lots or on community lots in any sub-neighborhoods that are present. Placing it on a community lot will spawn DJ Z-Buffer, an NPC. Sims can "Request" that the DJ play another radio station.

If placed on a residential lot, a booth can be used as a stereo, but will have extra stations that are not available on ordinary stereos. The player will also be able to direct a Sim to be the DJ.

In Nightlife, a neighborhood will have three pre-made NPC DJs once Downtown is associated with the main neighborhood, and a booth placed on a community lot will use one of them. The player can direct a Sim to be the DJ, and the Sim will earn simoleons while working at the booth. Also, Sims may have a want to work as the DJ.

If the booth is on a residential lot, it will generally function as a stereo, but a Sim will be able to "Be the DJ", which will build creativity. According to the Prima guide for Nightlife, the "House Mix" option will pull MP3s from the Music folder of the player's computer.

On both community and residential lots, other Sims can ask the DJ to change the type of music playing. Unlike The Sims, the DJ booth cannot play any radio stations. There are four options to choose from: "Slow", "Medium", "Fast", and "House Mix". A Sim who is a DJ can also be directly instructed by the player to change stations.

The DJ Booth returns in The Sims 3: Showtime. Sims will also gain DJ skills from manning the DJ booth. Sims can play four genres from a DJ booth: Dubstep, Drum 'n Bass, Funk, and Niche. Skilled DJs can also hand out Track Mixes similar to albums. There are also opportunities for skilled DJs to perform gigs at venues. If placed on a community lot, it will not spawn an NPC DJ, but a Sim can become one.

DJ booths return in The Sims 4: Get Together, and they come with their own DJ Mixing skill, which unlocks a variety of special effects the further Sims progress in it.

The number of genres Sims can play on the DJ booth depends on their level in the DJ mixing skill. The higher their skill, the more genres they can play, and the more interactions become available to them. Sims can also choose to hire a DJ to turn the tables for them, although they will miss out on the opportunity to gain the DJ mixing skill. If nobody is operating the booth it can function as a stereo, but it has access to a limited number of radio stations: Electronica, Hip-Hop, NuDisco[BNS], Pop, Retro and S-Pop[CL]. 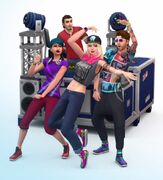 When a Sim maxes the DJ mixing skill, they unlock a swanky helmet!
Add an image to this gallery
Retrieved from "https://sims.fandom.com/wiki/DJ_booth?oldid=917407"
Community content is available under CC-BY-SA unless otherwise noted.