Cyrus Best is a pre-made babysitter who resides in Bridgeport. He is notable for being the only Evil babysitter, so far in the game. He does not have any relationships or skills at the start of the game, though he may gain some later on via story progression. He carries a book in his inventory. He is 12 days away from becoming a young adult. His female counterpart is Peyton Suzuki. There are some teens that have the Evil Trait such as VJ Alvi and Jeffrey Castor.

He shares his last name with the Best family from Starlight Shores, although it's unknown if he's related to the rest of the family. 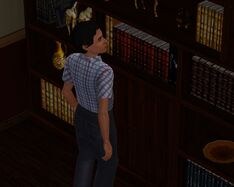 Cyrus in-game
Add an image to this gallery
Retrieved from "https://sims.fandom.com/wiki/Cyrus_Best?oldid=888959"
Community content is available under CC-BY-SA unless otherwise noted.