The Curiouses in The Sims 2 have a fondness for aliens. Glarn Curious was abducted by Pollination Technician 9 and had twin girls, Lola and Chloe Curious. Pascal Curious is pregnant with an alien child when the family is first played, and Jenny Smith married Pollination Technician 9, her half-sisters' father, and has had two children with him (Johnny and Jill Smith). Vidcund will be abducted and impregnated, if directed by the player to use one of the telescopes when the player first starts playing the household.

Their starting funds are §4242. This may be a reference to The Hitchhiker's Guide to the Galaxy, in which 42 is the answer to life, the universe and everything.

The family relationships between the brothers and their half-alien relatives are not set. Checking with SimPE shows that the brothers know their full sister, Jenny, but not her husband or children. They also do not know their half-sisters Lola and Chloe.

The Curious family has a box of pizza in their house at the start of the game.

Marshall Curious is a busy scientist in Twinbrook, but the family struggles to pay the mortgage. Cherish Curious took up teaching to make ends meet, and discovered that she loved the career. Notzo Curious, grandfather of the Curious brothers and Jenny in The Sims 2, is only a toddler in The Sims 3: Ambitions, and is best friends forever with Zo Whelohff. The Curious family live far out of town in a large three-story home with a sizeable, but empty garden, a Drafting table, a Scraptronic™ Workbench and a large basement. Their home is located in one of Twinbrook's many swamps. There is a Sim named Steward Curious buried in Twinbrook, although his relationship to the family is never stated, although he bears a striking resemblance to Marshall, and has the same haircut and facial hair, further suggesting some sort of relation.

The Curiouses are one of the few families that have five generations, along with Veronaville's Monty and Capp families. 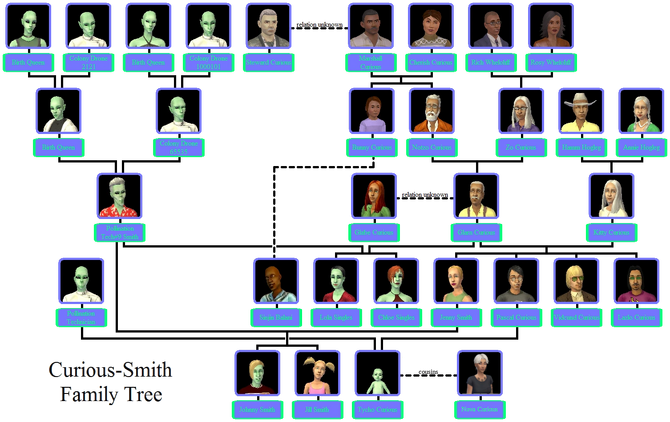 Add an image to this gallery
Retrieved from "https://sims.fandom.com/wiki/Curious_family?oldid=929035"
Community content is available under CC-BY-SA unless otherwise noted.