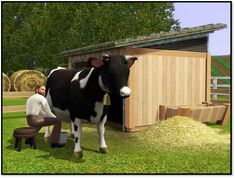 A sim milking a cow.

Cows are a type of NPC animal found in The Sims 2 for Nintendo DS and PSP. Cows also appear as a part of the "Farm Fresh Folk Set" on The Sims 3 Store.

Cows are featured in The Sims 2 for Nintendo DS. They are found in the field outside of Strangetown, near Jebidiah S. Jerky's home. They can be interacted with in three ways; Players can either milk them, or tip them over. They can also give the cow a gift, but only chocolate seems to have an effect. After the Sim has tipped the cow over, it will simply come back up. If a cow is milked after it has been tipped over it will produce a milkshake instead of a glass of milk. However, if the cow has been given chocolate it will produce chocolate milk, or chocolate milkshake (if it has been tipped over). This is only a feature and is profitable nor more effective in filling the need bar. In the field, there's also a red colored bull. No interactions are allowed with this animal.

Cows also appear in The Sims 2 for PlayStation Portable. They appear in the "Kine Dairy" building in Deadtree, but cannot be interacted with.

Cows returned to The Sims 3 in the "Milkin' It Dairy Corral" premium content included in the "Farm Fresh Folk Set" from The Sims 3 Store. SimGuruTaterTot has shared some information about what this cow can do:

Add an image to this gallery
Retrieved from "https://sims.fandom.com/wiki/Cow?oldid=941027"
Community content is available under CC-BY-SA unless otherwise noted.