Costume chests are objects in The Sims: House Party and The Sims 3: Generations that Sims use to dress up.

The Porta-Parody Costume Trunk can be used by both adults and children. Directing one Sim to change into a costume will make everyone on the lot change into costumes as well.

There are eight themes to choose from, which include Costumes, Disco, Formalwear, Beachwear, Clubwear, Swimsuits, Togas and Westernwear. The trunk also has a "Dress Normal" interaction to change Sims back into their everyday outfits.

The Dreamer's Costume Chest is an object included in The Sims 3: Generations. Unlike House Party, this chest can only be used by children, and it has a fun score of 8.

Sims can choose from four costume types, all of which are gender-neutral: Tyrannosarus Rex, Astronaut, Prince and Princess.

Princess outfit
Add an image to this gallery 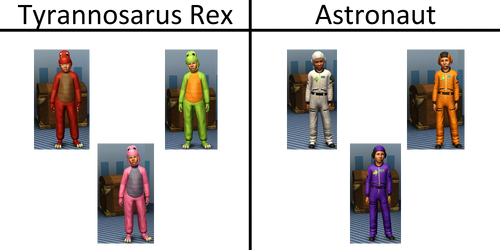 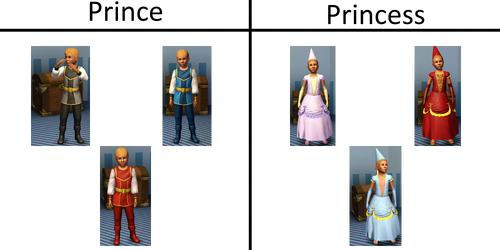 Prince and Princess
Add an image to this gallery

Costumes can be chosen through the "Transform Into..." interaction, which then gives the following options:

A boy Sim wearing a Princess outfit.
Add an image to this gallery
Retrieved from "https://sims.fandom.com/wiki/Costume_chest?oldid=913245"
Community content is available under CC-BY-SA unless otherwise noted.