Corrupt file on The Exchange 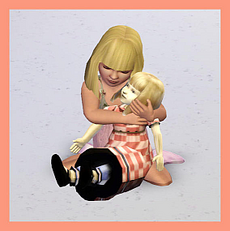 The corrupt doll being held by a child.

In June 2010, several players noticed that a package file was attaching itself to other packages in The Sims 3. The file was a corrupt girl doll, incorrectly cloned from the teddybear. Game installations became 'infected' by players downloading lots, houses or Sims with the hidden doll attached, similar to the way many computer viruses spread, what caused many players to believe, that it was in fact a virus, which is actually not the case. The doll was determined to cause longer loading times and game crashes, some players even reported lost savefiles. Players then unknowingly uploaded these 'infected' packages to The Exchange, causing it to spread to other players further.

Many The Sims community sites began reporting the issue and a Simmer named glitzyangel posted a guide on how to get rid of it. After a while EA responded with a sticky on their forum, informing the community about the issue.

A fixed version of the doll was later uploaded by the original creator.