Cornwall Capp (né Dane) is a pre-made male Sim from Veronaville. He is the son of Hamlet and Tobea Dane and the husband of Regan Capp. When the two got married, Cornwall took Regan's last name. He can be found in the Family bin in Veronaville along with Regan and Kent, Regan's brother. When the family is first played, Cornwall is 20 days from being an elder.

Cornwall and his wife, Regan, have no children when the game begins. Their relationship is poor, their daily relationship is under 60 points. Their family description suggests that the two are focused on their careers, but it is obvious that at the start of the game, neither of them are employed, and never have been, as shown by their memories. It is up to the player to determine whether or not to live up to the pre-written suggestions.

The marriage of Regan and Cornwall was probably arranged, which could explain why they have poor relationship and are not in love and never been. Judging by Cornwall's personality, bio, and aspiration, he probably only married Regan for her financial status and her family's power and job. However this would be inconsistent as it would be her father's money that Cornwall would be after and not Regan's.

Unlike Albany, Cornwall doesn't have a major role in the feud with the Montys despite being self-absorbed and power hungry. Cornwall's only enemy is Patrizio Monty, though he does have negative relationships with Bianca Monty and Kent. Tellingly, Patrizio has never even met Cornwall. If Patrizio or Bianca meet Cornwall, they can easily persuade him to set aside his grudge.

In King Lear, Cornwall is portrayed as being "bad" and Albany Capp "good". However, in The Sims 2, Albany seems to be the more domineering and harsh one of the two, as he is more involved with the feud than Cornwall. Sometimes if Kent asks Bianca to move in with them and she accepts, Cornwall's relationship towards her will be reset, causing him to lose his dislike for Bianca. The reason for this is unknown, though it probably only happens if Bianca still hasn't met Cornwall.

When editing in SimPE, Cornwall's zodiac sign is not recognized. This could explain why he doesn't have a zodiac sign mismatch in-game like most pre-made playable Sims from the base game do. The only memory Cornwall has of his mother is her death. He is friends with his father-in-law Consort Capp at the start of the game, though the friendship isn't mutual. 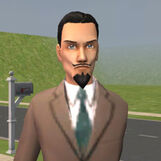 Retrieved from "https://sims.fandom.com/wiki/Cornwall_Capp?oldid=910749"
Community content is available under CC-BY-SA unless otherwise noted.