The Sims Wiki
Register
Don't have an account?
Sign In
Advertisement
in: Sims, Female Sims, Adults,
and 48 more
English

Cornelia Goth (née Crumplebottom) is a pre-created, playable Sim in The Sims: Unleashed and The Sims 3. She first appeared in the Unleashed expansion pack along with her husband, Gunther Goth, and their two cats, Hecuba and Menelaus. She is the matriarch of the Goth family and Pleasantview.

Since The Sims 3 is a prequel to The Sims, Cornelia and Gunther are adults. Her appearance is somewhat of a goth, with purple colored hair, though her natural hair color in The Sims 2 is black. She wears a long, dark purple/black dress.

She is currently a stay-at-home mom, who is very skilled at painting (level 6). She doesn't have a very good relationship with her husband, Gunther Goth, as he is a workaholic and doesn't pay her much attention. This however contradicts Mortimer's bio, which claims that their marriage was strong and healthy. Although friends, they do not have a high enough relationship to WooHoo.

Her parents, Prudence and Simon Crumplebottom, are both deceased and buried in the Goth graveyard. Cornelia is a friend of Vita Alto and an acquaintance of Nick Alto, Geoffrey Landgraab and Nancy Landgraab. Cornelia's closest relationship is to her sister, Agnes Crumplebottom, with whom she is good friends. Both sisters will often become best friends, shortly after the game begins.

Her lifetime wish to have a perfect garden is hard to fulfill, as she has not learned the gardening skill, has no seeds in her inventory or plants in her yard, and lacks the green thumb or loves the outdoors traits. In addition, she is only 7 days away from becoming an elder.

If The Sims 3: Seasons is installed, she often works at the food booths at the Sunset Valley Summer Festival along with Madison VanWatson.

Cornelia Goth and her husband Gunther Goth are introduced in The Sims: Unleashed, along with their two cats Hecuba and Menelaus. In her bio, she is glad that her granddaughter, Cassandra, is so nearby. She is the founder of the Sim City Bridge Society, and enjoys high tea and phrenology. She is perhaps a friend of Buffy Snooty Patooty, whom she may meet when having high tea in the club or playing bridge. Also, judging from her clothing (and the fact that Gunther has a job), she is likely to be a housewife in this game.

Her relationship with her husband seems to have recovered, as she is fully in love with him by the time of this game. She wears a long and elegant black and silver dress. Unlike The Sims 2, her last name in The Sims is Goth Sr, but that is only to distinguish between the different families.

When first played in Neighborhood 1, she will have no relationships with Mortimer, Bella, and Cassandra.

By the time of The Sims 2, both Cornelia and her husband are now deceased. She died in a fire shortly after her son Mortimer retired. Her husband predeceased her in a separate fire. She is buried in the new Goth home with Gunther, her father, sister, father-in-law, and mother-in-law.

She wears a long black dress (although it wasn't as fancy as the one she wore in The Sims) and round glasses, the only time in the series where she wears them. Like Mama Lothario, she has an unused French Braid hairstyle. It is very similar to hairstyle that is available in Create-A-Sim, but the texture is slightly different. If she is resurrected or appears as a haunting ghost, her hairstyle will change into the French Braid hairstyle present in the game.

According to Cornelia's SimDNA in SimPE, her hair was black before it turned grey. According to her age data, she had 27 days left in the elder life stage when she died.

When her character file is viewed in SimPE, Cornelia has relationships with several sims and NPCs that are corrupt[which?]; this could lead to corruption indirectly unless cleared using HoodChecker before resurrection!

In The Sims: Unleashed, Cornelia lived with Gunther and their cats Hecuba and Menelaus in a large mansion at 77 Maple Street in Old Town, a little further from Sim Lane. The home has a small graveyard (like all Goth homes) but there are no ghosts, so it is not known who is buried there. Perhaps, Gunther died in a fire in the mansion, then Cornelia died in the Goth home, which then was re-constructed into a new and improved house for Mortimer, Cassandra and Alexander Goth in The Sims 2. In The Sims 3, Cornelia, Gunther and Mortimer live in a big house with its own cemetery.

Cornelia with her sister Agnes. 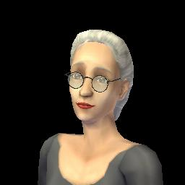 Cornelia in Create a Sim

Cornelia going down the stairs.

Cornelia by the stairs.

Cornelia getting an autograph.

Cornelia in the garden.

Cornelia, a grumpy Sim, gets quite aggravated right before her morning sickness kicks in. 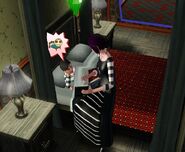