Cordelia Capp is a pre-made deceased Sim featured in The Sims 2. She is the youngest child of Consort and Contessa Capp, wife of Caliban Capp and mother of Tybalt, Juliette, and Hermia. She has two sisters, Goneril and Regan, and brother Kent. Oddly, despite being the youngest in Consort's memories, the family tree lists her as the oldest.

During her lifetime, Cordelia resided in Veronaville, one of the neighborhoods that shipped with the game. It is unknown whether Caliban married her for her wealth or because they loved each other. However, it has been noted that they will usually have a strong chemistry, if they are resurrected after Nightlife or later is installed. Cordelia was a Family Sim, but only potty trained Tybalt and Juliette while her husband taught them other toddler skills. Cordelia died in a fire along with her husband, possibly casualties in the feud between the Capps and the Montys. After her death, Cordelia's children were taken by her parents. Both her urn and her mother's urn are at the Capp Manor.

It is possible that Cordelia was meant to be playable, because she was created with the rest of Capp family (She was the 3rd Sim created in Veronaville. Typically, living Sims are created first, and their dead ancestors are created afterwards). While Consort's memories place her death before the birth of her nephew Hal, her sister's memories place her death soon before the birth of her niece Ariel. Judging by her namesake, sign, and her mother's bio she may have been against the feud between the families.

Cordelia, despite being a Family Sim, has a hidden Romance aspiration token. She was 29 days from being an elder when she died, according to SimPE. When resurrected, Cordelia will have the 14th face template in Create a Sim, but with the nose from the 2nd template. She will also have light lipstick, eyeliner and eyebrows that aren't shown on her headshot. Even though her thumbnail shows her with brown eyes, her eyes are actually grey.

The gmdc data of her hidden elder stage image can actually be found within her character file, but it goes unused. Interestingly, the face from her elder thumbnail may have been her original appearance that got corrupted. This could prove that the developers had gone back to fix her file using a new facial structure after discovering her corruption. This is strange as her husband Caliban did not receive this treatment nor did any of the corrupted Strangetown Sims.

A younger version of her family appears in The Sims 3 Store World, Roaring Heights. However, as the youngest of four children, Cordelia does not make a canonical appearance. Her three older siblings, Goneril, Regan and Kent are, respectively, a Child, Toddler and unborn baby at the start of the game.

Cordelia is the goodly youngest daughter in King Lear. She marries the King of France. At the end of the play she is hanged on Edmund's instructions.

Hidden picture of Cordelia Capp, showing her as an elder 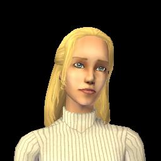 Cordelia with her genetic face and eye color