The Sims Wiki
Register
Don't have an account?
Sign In
Advertisement
in: Worlds in The Sims 4, High School Years, Copperdale
English 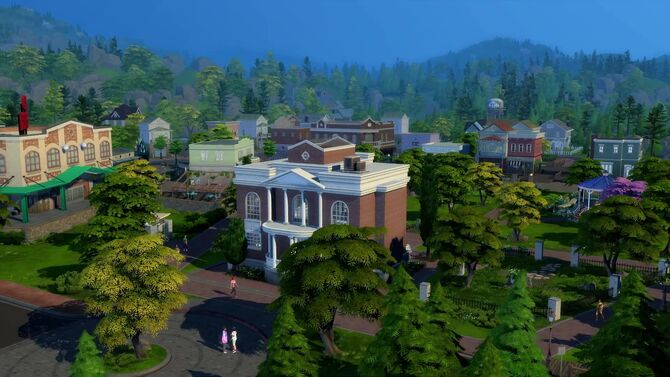 Copperdale is a world included in The Sims 4: High School Years expansion pack.

Bring friends, family, or even a special someone, to enjoy the thrills of Plumbite Pier's waterfront fairground filled with attractions.

Learning is always an adventure! Dive into academics or take a break from studying to cheer on the Womp Womps at a Copperdale High afterschool festival.

There are 12 lots in Copperdale.

§22,000
Ava Harjo, Lucha Harjo, Noah Kane, Ash Harjo
Brought together by their mutual obsession over food, Ava and Lucha fell in love. Ava was recently hired at the High School to work in the cafeteria, and with her expert cooking skills, the food has never been better! Lucha, still learning some chops, was promoted to Head Dishwasher and couldn't be happier. Ash has decided to fully commit to a life of fashion, diving into the Simfluencer lifestyle and spending loads of their time on Trendi. Noah, a bit of a prankster, spends his time training for football and daydreaming about his secret crush, Sidney Price. With teens to raise and recipes to create, the Harjos are in for some wild adventures.

§50,000
Tai Lum, Mei Prescott, Molly Prescott, Amy Prescott
Passed down through generations, this historic estate is home to the Prescott Family. Mei Prescott, Copperdale's High School Principal, lives here with her two daughters and her father, Tai Lum. After her husband's passing, Mei put all her efforts into protecting her girls and showering them with affection. Often times to an embarrassing degree. Molly is a star student with a secret passion for music. Taking a page from her troublemaker little sister Amy, she's learning to embrace her more rebellious side. Tai enjoys time with his grandchildren, especially the extra moments he has with Molly when working at the school as a janitor. Together, the family proudly carries on the legacy of the Prescott name.

§28,000
Marcel Price, Janae Price, Kevin Puri, Sidney Price, Savannah Price, Jayden Price
High school sweethearts and Copperdale alumni Janae and Marcel Price have returned, moving back into their old neighborhood with their three children: Sidney, Savannah, and Jayden. They also welcomed Kevin, a foreign exchange student, into their lively home. It's a busy household, stirring with activity and thriving pursuits. While Marcel works on his latest novel, Janae works full-time as a successful Regional Manager. The twins, Savannah and Sidney, each enjoy their own interests while trying to keep up good grades. Jayden looks up to his siblings a lot, and can't wait to be just like them, his buddy Kevin included. Life can certainly get away from them, but they know they can always depend on one another.