Cooper Seifert is one of the pre-made NPC Film and Literature Hobby instructors who comes from Hobbies, the secret sub-neighborhood introduced with The Sims 2: FreeTime. The other two film and literature hobby instructors are Larry Owens and Madeleine Mace. He appears in every neighborhood once FreeTime has been installed. Cooper can be made playable by befriending and asking him to move in, or by marrying him.

He has short brown hair, grey eyes, and dark skin. Cooper is a Knowledge Sim with the Sagittarius zodiac sign. As far as personality, he is very active and quite playful. But Cooper is very sloppy, quite shy, and somewhat grouchy. He is mostly interested in Food, Paranormal, and Entertainment. Cooper has the same facial structure as Jace Macarevich. His pre-destined hobby is Nature.

Even though his default head-shot depicts him having a mop top hairstyle, and a blue, black, and grey sports outfit, when Cooper is first spawned in-game, he will have the short slicked hairstyle that Mortimer Goth has. His outfit will also change to the same Mr. Big outfit that Mr. Big wears. However Cooper will still retain the hairstyle in his default thumbnail, for most outfits besides everyday. He has 0 interest points in Sci-Fi which is relatively uncommon, given that almost all other NPCs, young adult and up, have 4 points in Sci-Fi. 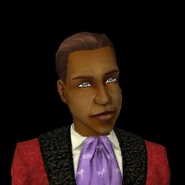 Cooper Seifert's appearance in-game.
Add an image to this gallery
Retrieved from "https://sims.fandom.com/wiki/Cooper_Seifert?oldid=838546"
Community content is available under CC-BY-SA unless otherwise noted.