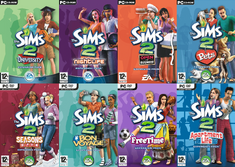 There are currently seventeen released stuff packs and an eighteenth stuff pack being developed:

The Sims Medieval has only one adventure pack:

Each content pack for The Sims is centered around one or more themes. Popular expansion packs include dating, pets, seasons, vacationing and exotic destinations, business and magic.[4]

Retrieved from "https://sims.fandom.com/wiki/Content_pack?oldid=936811"
Community content is available under CC-BY-SA unless otherwise noted.