Consort Capp (né Thebe) is a pre-made Sim living in Veronaville in The Sims 2. Earlier in his life, he went on a vacation with his family in Roaring Heights.

He is the son of the late Hector and Andromache Thebe. When he married Contessa Capp, he gave into their matrilineal traditions and took her last name. He is the patriarch of the house of the Capp family. He had a total of four children with: Goneril, Regan, Kent, and Cordelia. Cordelia died in a fire, alongside her husband, which is often talked about being involved in the feud against the Montys.

Consort returns alongside his family in the store world Roaring Heights. He is a young adult who lives with his wife, Contessa, and their children, Goneril and Regan. His wife is pregnant with their third child at the start of the game.

He is employed as a Vice President in the Business career. He is good friends with his children, friends with Donna Morgan, and is acquainted with two of her three children, Carolyn and Evelyn, and his boss. He has 4 skill points in charisma at the start of the game.

Consort lives in an English-style home with his three orphaned grandchildren: Tybalt, Juliette, and Hermia. He is sworn enemies with Patrizio Monty, the patriarch of the Monty family. They were best friends and co-workers until their rivalry over Contessa and Patrizio getting fired started their feud. He holds a position as a CEO in the Business career. When first playing the Capps, Consort will want to retire from his job as a CEO. His wife Contessa seems to have recently died because it is the last memory that Consort has.

Although 10 members of his family are old enough to work in a career at the start of the game, Consort is the only one of them who holds a job. When first played, he is 56 days old, being on his 3rd day as an elder, with 9 days left before dying of old age. According to his Sim DNA in SimPE, his hair was black before it turned gray. This is unusual, considering his hair is blonde in the Capp family storytelling images and The Sims 3, and none of his ancestors had any genes for black hair. This may be an oversight by the developers.

Consort is known to be the shoving Sim when a Sim from another household stargazes with a telescope during the day. Uniquely, he is not the first playable Sim created in Veronaville; Bottom Summerdream is; she has the lowest instance number when viewed in SimPE. But because Bottom is only a child, she cannot shove other Sims; Consort is chosen instead as he is the second playable. If Bottom ages into an adult, she will become the shoving Sim. If Consort or any Sim residing in Capp Manor stargazes with a telescope, Patrizio Monty will be the shoving Sim instead.

There is a hidden SimPE thumbnail of Consort wearing the same shirt as his father, Hector Thebe. In the thumbnail, he has blond hair, grey eyebrows, and stubble. Additionally, the thumbnail displays Consort to be an elder, hence his facial features and wrinkles, which is unusual given that the outfit he is wearing is only available to adults in-game.

Consort taught his children some toddler skills, but they do not have any memory of it. In one of the Monty family storytelling images, Consort has a hairstyle that can only be accessed in Create a Sim with debugging mode on.

Though his name wasn't drawn from any of the characters from Shakespeare's plays, Consort's character plays a very similar role to Lord Capulet from Romeo and Juliet and the titular character from King Lear.

Even though Consort has reached level 5 of the Business career, he doesn't have the corresponding career reward available for him to purchase. Patrizio, Isabella, and Antonio Monty also share this quirk. 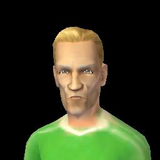 Hidden thumbnail found with the use of SimPE