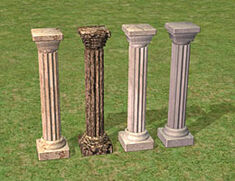 Four columns in The Sims 2.

Columns provide support for any floor tile placed immediately above them, and a two tile radius around the initial tile. Placing additional columns or utilizing walls can be used to extend the reach.

Some columns, when placed near each other, will automatically connect to create an arch. In The Sims 2 and The Sims 3, these connecting columns are categorized separately from non-connecting columns. This feature allows the player to construct buildings inspired by Roman and Greek architecture. In The Sims 4, columns can instead be connected with spandrels.

Columns placed to support floor tiles can be removed without consequence to the floor above; the floor tiles placed while the column was present remain in place. This technique can be used to provide temporary support to a floor above if, for example, a long unsupported bridge is being built. Additionally, floors placed while columns are down will remain, even if there is nothing physically supporting them. This trick can be used to create floors, and even entire buildings, that 'float' above the ground without any form of support. 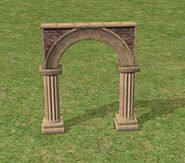