The Sims Wiki
Register
Don't have an account?
Sign In
Advertisement
in: Skills, The Sims 3, Objects, Secret skills
English 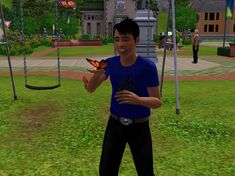 A Sim catching a butterfly.

Not to be confused with Collecting (The Sims 4).

Gems, metals, space rocks, beetles, and butterflies are collectibles from The Sims 3. With the Ambitions expansion, Sims can also collect Lesser Spirits. With the World Adventures, it is also possible to transform objects.

Collecting, while not defined in the game, did exist to some extent in The Sims Castaway Stories. In order to survive, Sims could gain resources by collecting various debris across the island, such as metal, wood, grass or bamboo. Sims could also earn food by gathering fruit from different trees or by fishing or spearing fish.

If you see a collectible, you can click on it and select 'catch' if it is an insect, or 'collect' if it is a seed, gem or a rock. In The Sims 3: Pets dogs with the hunting Skill can also sniff out collectibles. Collectibles that dogs bring home for Sims will not count toward any collection goals in the Sim's skill journals, even if the Sim orders the dog to find it; therefore it is not a good idea to send Fido out in hopes of completing any challenge (such as collecting all gem types for the heart cut). Dogs with a high hunting skill however, will get the ability to "Locate Collectible" which works in a manner similar to the Collection Helper.

A Sim who has collected an insect, may donate it to the Science Lab for money. The rarer the insect, the more money they will receive.

Players can track the number of collectibles a Sim has collected by using the collecting journal, which is similar to a skill journal and can be found in the same area.

Collect 10 types of gems, and the rarest gem cut shape will be bestowed upon your Sim! Watch out... it's valuable!

Find 5 unique metals, and your Sim will routinely get additional ingots returned in the mail.

Once your Sim finds at least half of the varieties of space rocks, it will be easier to find ones you haven't yet stumbled across.

Awesomest Rock Collector in the Universe

Find all the space rocks, and your Sim will have more luck collecting ones of higher value.

Catch 10 types of butterflies to become a Butterfly Collector. Sims with this title are learned in the ways of the insect and will have an easier time finding beetles and butterflies.

Catch all the different fireflies to become a champion Firefly Collector! Having found all of the firefly varieties, you'll have a much easier time collecting more fireflies and other insects.

Catch 10 types of beetles, and your sim will never fail at catching butterflies or beetles again.

Find 7 unique mushrooms, and the quality of mushrooms grown will increase.

Collect at least one of each type of Nanite, and wild Nanites will start to appear around your personal Bot Building Station!