The Climate family is a pre-made family that is heavily featured in promotional material for The Sims 4: Seasons. It can be downloaded from the official Maxis account on the Gallery.[1] It consists of married couple Arthur and Janine, along with their teen daughter, Summer, and their toddler son, Nicolas.

Vladislaus Straud is a cousin of Arthur, according to an official blog.[2] The family is unaware that he is a vampire.

Climate: Common weather conditions in a specific area.
Arthur: Has an unknown origin, but is possibly derived from Celtic words meaning "bear", "man" and/or "king".
Janine: A diminutive of Jeanne, the French feminine form of John.
Summer: The summer season.
Nicolas: The French form of Nicholas, likely in reference to Saint Nicholas on whom Santa Claus was based. 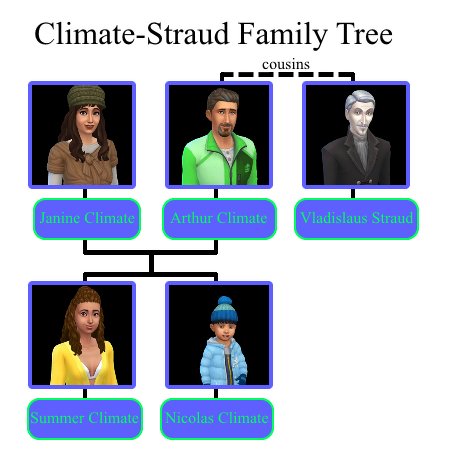 Janine and Arthur invite Vlad over for Harvestfest.

The Climates at a winter festival in San Myshuno.

Retrieved from "https://sims.fandom.com/wiki/Climate_family?oldid=926682"
Community content is available under CC-BY-SA unless otherwise noted.