Claudio Monty was a pre-made Sim who died in the Veronaville neighborhood. He was the husband of Olivia Monty, the father of Mercutio and Romeo, the younger brother of Bianca and Antonio, and youngest child of Patrizio and Isabella Monty. He is deceased at the start of the Veronaville scenario as part of the back story of the Monty Family. His urn can be found inside Monty Ranch.

Claudio's eyes were light blue, as opposed to the rest of his family's brown eyes. In fact, none of his ancestors have light blue eyes. He is one of three deceased Veronaville Sims to have a pre-made biography (the other two being Contessa Capp and his wife Olivia Monty) and the only one as well to already have a career and skill points. Claudio also has personality points, as many deceased Veronaville Sims do not. He, his wife, and Contessa Capp can be resurrected using the Resurrect-O-Nomitron and will look just like they appear in their head-shots but the player will have to restore their marriages. He even holds a job as a Sous Chef to the family restaurant, despite not having the skills for that career level. Patrizio's memories might suggest Claudio and Antonio are twins, though that is never stated. Claudio and his wife both died due to starvation.

If SimPE is used, a hidden thumbnail of Claudio as an elder can be accessed. Although his facial features will be the same, he has a different outfit and grey hair. The reason for the thumbnail existing is unknown. In Claudio's character files, he has a hidden Knowledge aspiration token. According to his age data, he was 23 days from being an elder when he died. Even though Claudio had reached level 6 of the Culinary career, he doesn't have the corresponding career reward available for him to purchase.

Strangely, if his appearance is extracted with SimPE to Body Shop, he will be thin instead of fat. This oddity also occurs with Buck Grunt and Antonio Monty.

In Monte Vista, his mother Isabella is pregnant with him. The player has the option of naming the unborn baby "Claudio", linking to the narrative set in The Sims 2.

Shakespeare has two characters named Claudio: The Lord of Florence in Much Ado About Nothing, and a gentleman in Measure for Measure. 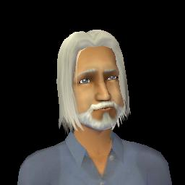 Retrieved from "https://sims.fandom.com/wiki/Claudio_Monty?oldid=910695"
Community content is available under CC-BY-SA unless otherwise noted.