The Sims Wiki
Register
Don't have an account?
Sign In
Advertisement
in: Premade families, Families with difficulty level 3, Families from The Sims 3 Store,
and 2 more
English

The Clark family are from the downloadable neighborhood, Aurora Skies. It consist of Evan, Jessie and Wanda Clark, and an unborn child. Their family bio says that the Clarks moved to Aurora Skies because of the eco-friendly atmosphere. The family reside at 8 Rock Ridge Road and begin with §25,000 in household funds.

They are probably related to Sabrina Clark, a babysitter from Lunar Lakes, since there are many descendants of other Sims there.

Clark: Meaning "scirbe" or "cleric" in Old English. A famous bearer was William Clark.
Evan: Anglicized form of Lefan, a Welsh form of the name John.
Jessie: Originally a Scottish form of the name Jean. In modern times it is also used as a diminutive of the name Jessica.
Wanda: A German name, meaning "a Wend", referring to the Slavic people who inhabited eastern Germany. 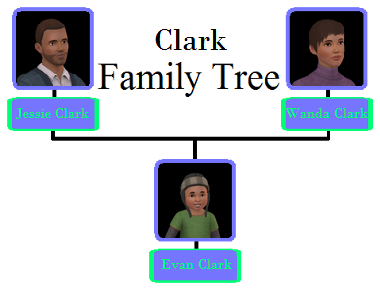