Clark Sauer is a pre-made repairman from Sunset Valley. He can be made playable by marrying him, or asking him to move in. At the start of the game, he doesn't have any relationships with the neighbors. He has one favorite food. He has three traits instead of the usual five. His female counterpart is Tuesday Sears. 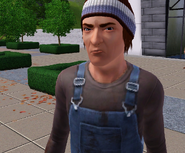 Clark's outfits
Add an image to this gallery
Retrieved from "https://sims.fandom.com/wiki/Clark_Sauer?oldid=932113"
Community content is available under CC-BY-SA unless otherwise noted.