The Sims Wiki
Register
Don't have an account?
Sign In
in: Neighborhoods in The Sims 4, Get to Work, Workplaces 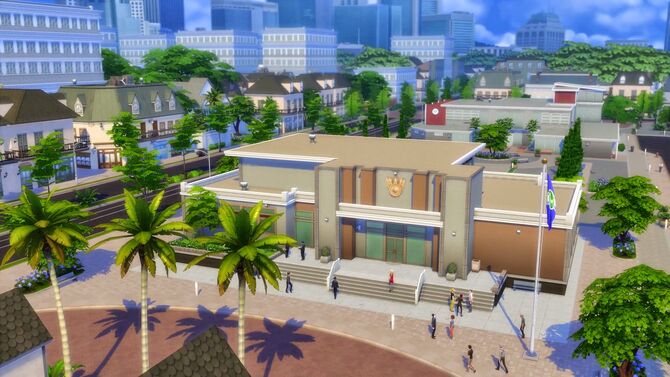 Although this article is based on official information, the actual name of this subject is pure conjecture.

Merge
This article or section is being considered for merging with Scientist Neighborhood. Reason: Limited topic, would be better served on a combined page. See here for discussion.

Police Station is the workplace for the detective career. It is a two-story building with jail cells, an interrogation room, an office type room full of computers, chief inspector's room and two bathrooms with showers. There is also a small gym with a kitchen on the second floor. The police station can not be edited in build mode without the usage of bb.enablefreebuild cheat.

Willow Creek Hospital is the workplace for the doctor career. Pregnant Sims (with up to one companion) also have access to the hospital. The lot is a one-story building (there is a second floor, but it can't be accessed and is empty) with multiple rooms for testing patients, a room where Sims can eat their food, reception, and the surgery room. As with the police station, the Willow Creek Hospital can not be edited in build mode without the usage of bb.enablefreebuild cheat.

As the Civic Center is only accessed by working in the Doctor or Detective careers, there aren't much amenities for Sims to enjoy. There are bare benches and trashcans located on the shoreline and in front of the hospital, but nothing else.

This neighborhood and the Scientist Neighborhood are both called "Office Site" when viewing a household's calendar in The Sims 4: Seasons.
Community content is available under CC-BY-SA unless otherwise noted.