A sim asking question to a wise chicken.

Chickens are a type of NPC animal that appear in The Sims 2: Castaway, a part of the "Fowl And Feathers Chicken Coop" in The Sims 3 Store and appear in Sulani in The Sims 4: Island Living.

Chicken also appear in The Sims 2: Castaway. They can be captured by using a crafted trap. Players can get chicken feather which can be used as a material for crafting clothing. 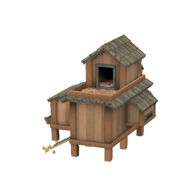 Charles the evil chicken.
Add an image to this gallery

Chickens appear as decorative neighborhood objects in The Sims 4: Island Living. They can be seen roaming around Sulani, and are purely decorative. They cannot be interacted with in any way.

Retrieved from "https://sims.fandom.com/wiki/Chicken?oldid=883912"
Community content is available under CC-BY-SA unless otherwise noted.